Cheick Kongo appeared to be out on his feet -- until he put Patrick Barry to sleep with a short right uppercut.

In what will undoubtedly go down as one of the most improbable comebacks in mixed martial arts history, Kongo survived nearly being stopped and flattened Barry with one punch in the UFC Live 4 main event on Sunday at the Consol Energy Center in Pittsburgh. The dramatic finish came 2:39 into the opening round. Barry lay unconscious on the mat, his right leg bent beside him, his open eyes staring blankly into space.


Advertisement
“It was perfect,” Kongo said, pointing to the uppercut that ended it.

The two heavyweights traded heavy leg kicks from the start, with Barry controlling the center of the cage and backing Kongo (16-6-2, 9-4-1 UFC) into the fence. He cracked the Frenchman with a sizzling overhand right that dropped Kongo where he stood and swarmed to finish. Referee Dan Miragliotta appeared close to stopping it and even made brief contact with the two fighters, but he gave Kongo, a proven 24-fight veteran, the benefit of the doubt.

With his back to the cage, a still wobbly Kongo unleashed a right hook that knocked Barry (6-3, 3-3 UFC) off balance, planted himself and followed it with the uppercut. Kongo trailed his unconscious opponent to the mat and landed a few hammerfists before Miragliotta called him off. 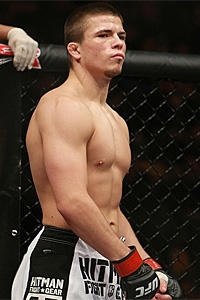 Charlie Brenneman made himself a factor in the welterweight division with the most important 15 minutes of work in his career.

A last-minute substitute for the suspended Nate Marquardt, Brenneman used a heavy dose of takedowns, grappling and scrambling to upset the world-ranked Rick Story in the co-main event. All three judges scored it 29-28 for Brenneman, a 30-year-old Hollidaysburg, Pa., native who has quietly won nine of his past 10 bouts.

Brenneman (14-2, 3-1 UFC) grounded Story repeatedly, frustrating the surging welterweight contender with a relentless pace. The AMA Fight Club standout struck for takedowns in all three rounds and powered out of repeated submission attempts from story, including a second-round guillotine choke and a third-round triangle choke. Story (13-4, 6-2 UFC) mounted Brenneman with 1:19 left in the fight but failed to exact any damage and allowed the underdog to slip out the back door.

“The Ultimate Fighter” Season 7 alum Matt Brown halted a three-fight losing streak with a hard-fought unanimous decision over John Howard in a welterweight showcase. All three judges scored it 29-28 for Brown, who won for the first time in almost two years.

Howard scored effectively with low kicks but found himself largely outgunned on the feet. Brown (12-10, 5-4 UFC) wobbled him during a stout first-round exchange, punctuating a nice combination with a grazing head kick. Howard backpedaled in the face of superior firepower and abandoned a standup fight in favor of clinches and takedowns. However, Brown resisted his advances, and Howard expended valuable energy in a series of failed attempts to get the fight on the ground.

Brown scored with a trip takedown early in round two, landed in half guard and worked effectively from top position. Howard (14-7, 4-3 UFC) transitioned to a leg lock and swept into top position, only to be stonewalled and neutralized with an omoplata from his grounded opponent. The two welterweights traded takedowns in a largely uneventful third round, and Brown avoided Howard’s late bid for a kimura.

Unbeaten and improving “The Ultimate Fighter” Season 10 alum Matt Mitrione blasted through the 6-foot-6, 261-pound Christian Morecraft and scored a decisive second-round knockout in a featured heavyweight matchup. Undone by a beautiful three-punch combination, Morecraft met his end 4:28 into round two.

Morecraft (7-2, 1-2 UFC) had no answer for the hand speed and power his opponent brought to bear. Straight left hands, set up by wicked inside leg kicks, were at the heart of Mitrione’s attack. He put Morecraft on the canvas twice in the first round and nearly finished it through a series of power shots with less than a minute to go in the period.

As round two dawned, Morecraft was a spent force. Mitrione (5-0, 5-0 UFC) picked his spots and weathered two takedowns from his fading foe. A picture-perfect combination -- a right hook followed by a straight left hand and a straight right -- sent Morecraft’s mouthpiece flying and left the Team Bombsquad representative staring at the lights.