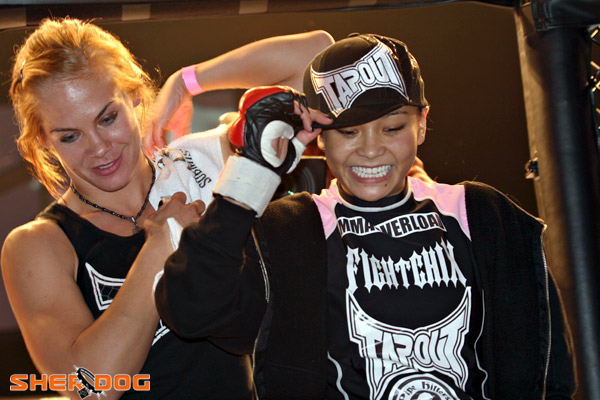 After nearly 22 months on the sideline, Michelle Waterson made an emphatic return to the cage in January, scoring a first-round submission triumph over Diana Rael at the Jackson's MMA Series 7. With that performance under her belt, the fighter known as “The Karate Hottie” had designs on getting back in action as soon as possible.

Things rarely go as planned in the MMA world, especially on the regional circuit, and a proposed June bout eventually fell through. Waterson wasn’t too disappointed with the cancellation, however. After all, bruises don’t really complement a wedding dress.

“Everyone’s like, ‘You’re crazy to fight before your wedding,” Waterson told Sherdog.com. “I was like, if it comes, it comes. I was training for it. It just didn’t line up, but that’s the fight game.”

On Saturday, Waterson will tie the knot with Joshua Gomez, a former U.S. Armed Forces amateur boxing champion, in front of friends, family and a host of Jackson’s Mixed Martial Arts teammates at Hacienda Vargas in Algodones, N.M. [Appropriately, invitations were designed to look like an old-school fight poster.] Sometime after the ceremony, she will make plans to get back in the cage.

“To be honest, I was kind of relieved [the fight fell through] because of the wedding,” Waterson said. “After the wedding we’ll probably get back into it and start trying to find a fight.”

Prior to her victory against Rael, Waterson hadn’t competed since an April 2010 knockout of Masako Yoshida in North Dakota. While she did make an appearance on Season 3 of “Bully Beatdown,” the MMA-themed reality show hosted by Jason Miller on MTV2, most of Waterson’s off time was devoted to taking care of her and Gomez’s newborn daughter Araya, who is now 15 months old.

Competing in a sport as demanding as mixed martial arts is an achievement in itself. Coming back to it after pregnancy was an entirely different challenge. Of course, Waterson proved she was up to the task when she submitted Rael.

“It was a great accomplishment for myself,” she said. “I had to prove to myself to myself that I could still do it. It made me feel like I could do anything.”

Even though her own fighting career is currently on hold, Waterson is excited about the state of women’s MMA and the opportunities afforded teammates like Strikeforce talent Julie Kedzie and world boxing champion Holly Holm. The emergence of new promotions such as the Invicta Fighting Championships also encourages the Colorado native, who says she would embrace the chance to fight for a larger organization.

“Women’s MMA is starting to slowly rise, and it’s a great time to be in the sport, so I’m excited,” said Waterson, who also mentioned that she might have another reality show gig in the works.

As for the more immediate future, Waterson’s honeymoon will have to wait -- her husband-to-be has a fight of his own in approximately six weeks. With those plans tentatively on hold until the end of the year, Waterson can join her future spouse in training if she so desires.