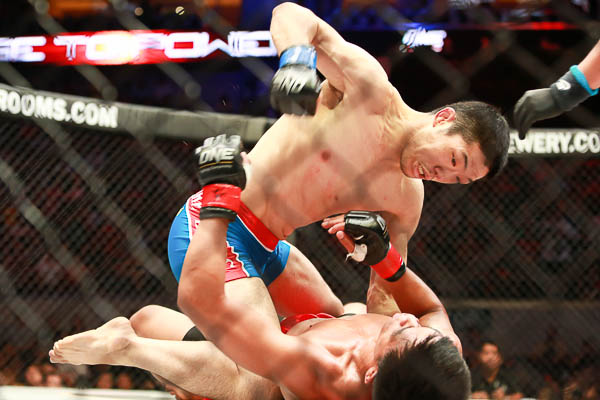 
Koji Oishi needed only one punch.

Oishi (24-9-10, 1-0 One FC) swallowed up Honorio Banario with a counter right hand, as he took the One Fighting Championship featherweight title by force in the second round of their One FC 9 “Rise to Power” headliner on Friday at the Mall of Asia Arena in Pasay, Philippines. Banario (8-2, 2-2 One FC) met his surprising end 1:45 into round two.

Banario was the aggressor from the start, as he tore into his Japanese foe with kicks, buckled him with one right hand and floored him with another. The champion swarmed for the finish, but Oishi, perhaps drawing on his considerable experience, weathered the storm. He delivered a wicked shot to the body to start round two and then walloped Banario with the fight-ending counterpunch. 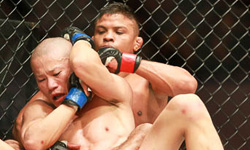 Photo: T. Irei
Fernandes took the decision.
In the co-main event, former two-division Dream champion Bibiano Fernandes cruised to a unanimous verdict over Shooto mainstay Koetsu Okazaki, as he won the interim One FC bantamweight title on the strength of repeated takedowns, a relentless ground game and two near submissions.

Fernandes (14-3, 2-0 One FC) struck for takedowns in four of the five rounds and capitalized on an ill-advised foot lock attempt in the fifth. Okazaki (8-3-1, 0-1 One FC) had no answer for the Brazilian jiu-jitsu black belt.

Fernandes nearly finished him with a rear-naked choke in the opening round, as he transitioned to his back following the first of many takedowns.

Okazaki’s situation did not improve as the match deepened. Fernandes mounted him in the third, fourth and fifth rounds, softening him with mild ground-and-pound while looking for submissions. The AMC Pankration-based Brazilian again moved to the back in round five, where he cinched another rear-naked choke. Only Okazaki’s considerable resolve and tenacity allowed him to survive and send the fight to the judges.

Fernandes, who in 2012 spurned advances from the Ultimate Fighting Championship, has won six consecutive bouts. 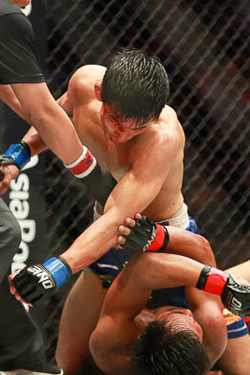 
Superior offensive and defensive grappling carried onetime Shooto titleholder Masakatsu Ueda to a unanimous decision over Kevin Belingon in the One FC bantamweight grand prix final. The 35-year-old Ueda (18-2-2, 3-0 One FC) has recorded seven wins in his past eight appearances.

A Paraestra Tokyo representative, Ueda paired a takedown with a kimura attempt in the first round and swept Belingon from the bottom in the second, all while mixing in strikes on the feet.

Belingon (11-3, 2-3 One FC) crafted a serious comeback in round three, where he had the Japanese veteran reeling with soccer kicks, knees and swarming punches. The promising 25-year-old later secured mount on the cunning Ueda and transitioned to his back, only to see him slip free and move to a mounted position of his own -- a counter that stemmed the tide and shored up the decision. 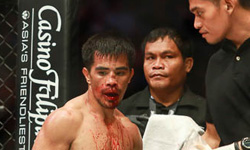 Urushitani (20-6-6, 1-0 One FC) rode a one-sided final frame to victory in his promotional debut. There, after pursuing his Filipino counterpart for the better part of two rounds, his punches began to find a home with authority.

The blows left Docyogen (10-2, 0-2 One FC) -- who enjoyed success with kicks to the legs and body of Urushitani early in the fight -- with what appeared to be a badly broken nose. Blood flowed freely, forced the 30-year-old into retreat mode and perhaps cost him the decision. 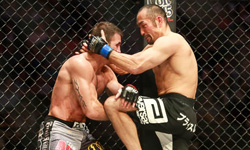 Photo: T. Irei
Suzuki silenced Baroni with a combo.
Japanese knockout artist Nobutatsu Suzuki wiped out Phil Baroni with an exquisite two-punch combination and follow-up ground strikes in the first round of their welterweight duel. Baroni (15-17, 1-2 One FC) succumbed to the blows 4:17 into round one, as he lost for the seventh time in his last nine appearances.

Suzuki (10-1-2, 1-0 One FC) survived a knockdown and a takedown from the “New York Bad Ass” to exact some damage of his own. He backed up Baroni with a series of knee strikes, leveled him with a combination and then tied the bow on the sixth first-round finish of his career with
a final volley of punches on the ground.

To make matters worse for Baroni, he appeared to suffer a broken ankle during his initial fall. 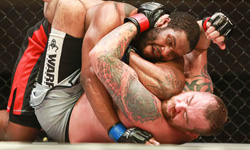 Photo: T. Irei
Johnson stopped Sylvia in round three.
The American Kickboxing Academy’s Tony Johnson stopped two-time UFC heavyweight titleholder Tim Sylvia on a third-round cut in a catchweight affair. Johnson (7-1, 1-0 One FC) brought it to a close 3:25 into round three.

Sylvia (31-9, 0-1 One FC) had his moments, as he peppered the former King of the Cage champion with a stout three-punch combination in the first round, staggered him with a right hand in the second and tagged him with a head kick in the third. However, he struggled to stay upright. Johnson struck for takedowns in all three rounds, neutralizing the Pat Miletich protégé’s advantage
on the feet.

In the third round, Johnson drove Sylvia to the ground with another takedown and split him open with a nasty elbow from half guard. Soon after, the bout was stopped. 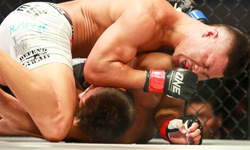