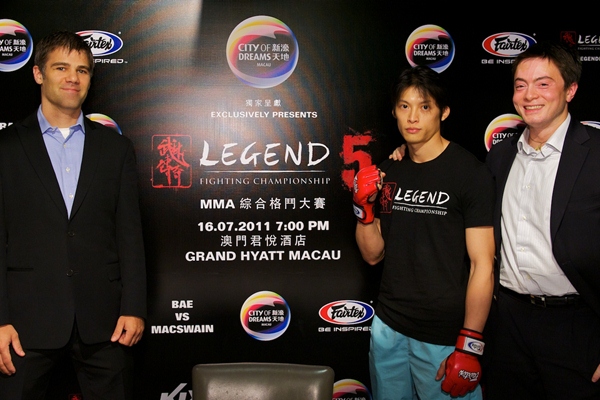 
Legend Fighting Championship is taking its ring to “the Las Vegas of Asia.”

After four shows in Hong Kong, Legend officials Wednesday announced that the promotion’s July 16 event will emanate from Macau, the special administrative region of China known as the world’s most lucrative gambling market.

Legend 5 will also mark the start of the 16-month-old organization’s partnership with City of Dreams, a sprawling “integrated urban resort” on Macau’s Cotai Strip which encompasses a mega-casino, 175,000 square feet of retail space, three separate hotels, and the iconic Bubble Theatre.

Speaking recently with Sherdog.com, Legend co-founder Michael Haskamp revealed that his company’s new deal calls for City of Dreams to host four Legend events over the next 12 months: July 16, Oct. 29 and two early-2012 dates to be determined.

“It’s huge for us because it allows us to plan a very consistent calendar. We’ll be slotting other events in between the Macau events, as well,” said Haskamp, noting that Legend hopes to run three additional cards in the same timeframe.

If the venue sounds familiar to fight fans, it’s likely because City of Dreams was set to host another, more infamous MMA event last October. That was before the show -- the second offering from local startup Fury, titled “Armageddon” -- was canceled on only days’ notice amidst allegations of promoter embezzlement and low ticket sales, leaving fighters such as Strikeforce veteran Carina Damm sans purse and stranded in Macau.

Despite a lengthy and public battle between two parties within Fury over the exact cause of the catastrophe, City of Dreams remained quiet on the matter. According to Haskamp, however, Lawrence Ho -- son of Macau casino magnate Stanley Ho, the man behind City of Dreams, and an avid MMA fan -- was instantly eager to give the fight game another go.

“In the U.S., when something blows up, often times, the company will distance itself from the concept or the problem as much as it can,” explained Haskamp. “In China, often times you say, ‘You know what? I’m going to prove to everybody that this was a good idea in the first place.’”

In November, only weeks after the Fury fallout, City of Dreams representatives contacted Haskamp and Legend co-founder Chris Pollak about bringing their show to Macau. Other regional promotions were reportedly under consideration -- namely, Beijing’s Art of War and Singapore’s Martial Combat -- but in the end, Legend was in line with CoD’s needs: a high-quality event with fighters from across the Asia-Pacific, marketable as a VIP experience for visiting gamblers.

“The term that they use in Macau is a ‘junket’... sort of a tour group operator who specializes in high-rollers,” said Haskamp. “As the Chinese gambling consumer has gotten more demanding and more sophisticated, now it’s about the add-ons. What kind of food can you give me? What kind of entertainment can you give me?”

The intimate Legend events will be one of many such bonuses at the resort, though far from the most extravagant: City of Dreams’ main attraction, the spectacularly over-the-top “House of Dancing Water,” cost a reported $250 million to create and produce, and is staged twice daily atop a purpose-built, 3.7 million-gallon pool.

For gamblers less interested in Cirque du Soleil-style theatrics than a live sporting event that can be gambled on, Legend’s shows carry an obvious attraction. But the nine-fight card announced Wednesday for Legend 5 should also appeal to MMA speculators and watchers of the Pac-Rim scene.

The main event features New Zealander Rodney MacSwain defending his Legend welterweight title for the first time since winning the vacant belt in a seesaw January bout with Pancrase fighter Hoon Kim. Opposing “Hot Rod” will be Myung Ho Bae, the South Korean “Wolverine,” 3-0 in the Legend ring, whom MacSwain replaced at Legend 4 on two weeks’ notice after Bae ruptured a shoulder ligament in training.

Legend will crown another champ in the co-main event, which concludes the four-man bantamweight tournament that began in January. Honggang Yao, an accomplished Chinese folkstyle wrestler now fighting out of Beijing’s China Top Team, will square off against 20-year-old Nam Jin Jo, who at 18 won Sengoku’s Gold Rush Korea bantamweight tournament.

Also featured on the bill is a middleweight attraction between former heavyweight prospect Hae Jun Yang and New Zealand’s Pat Crawley. Once dubbed by fans as the “Korean Fedor,” Yang will look to rebound from the first two losses of his career, which began with five consecutive knockout victories. The 23-year-old recently relocated to Busan Team M.A.D. in South Korea, where he trains with UFC welterweight Dong Hyun Kim.

Along with the opening round of Legend’s featherweight title tournament, Haskamp noted that the Legend 5 undercard contains a lightweight contest which could produce sparks both inside and outside the ring. Australian Rob Hill dropped a narrow decision loss to A Sol Kwon at Legend 2 and subsequently split for Granite City, Ill., where he has since trained alongside former UFC welterweight champ Matt Hughes at Finney’s H.I.T. Squad. It’s a move Haskamp admired -- “He just shucked it all and moved out to Illinois, basically because he wanted to get better” -- and one he looks forward to seeing in action against scrappy South Korean Yui Chul Nam.

“Both of these guys, they just talk so much s--t, so I think that they’re gonna do their best to get under each other’s skin,” Haskamp said of Hill and Nam.

Reigning Legend lightweight champ Adrian Pang is on hiatus as he welcomes his second child into the world, but the promotion plans to have a challenger ready for “The Hunter” upon his tentative fall return.

“We have a couple of guys in mind as potential opponents for him who I think we’re going to try and sign sooner rather than later,” Haskamp said. “I’ve got my eye on a couple of ex-Sengoku guys as legitimate contenders, and a good injection of talent into our lightweight mix.”

While time zones make live North American broadcasts a near impossibility for Legend, the promotion is currently in the process of firming up pay-per-view plans for Legend 5. Legend has yet to receive final buyrates for its January PPV debut, though Haskamp described numbers from American satellite provider DirecTV as “modest” and “in line with what we were thinking of.” The plan, he explained, will be to return with a stronger publicity push, given the increased marketing muscle Legend’s new deal will afford them.

Even as Legend enters into a new phase and a new home, some things remain the same, like the fact that the promotion must act as its own regulatory overseers. Although the Chinese Wushu Association has begun regulating some MMA in mainland China, the regions of Hong Kong and Macau remain without sanctioning bodies of any kind. As such, Haskamp said, Legend will continue to keep a strict eye on its medical guidelines, which have been informed by prominent American state athletic commissions such as California and Nevada. Since January’s event, for instance, Haskamp became aware that California does not allow fighters to shed more than two additional pounds after their initial weigh-in, a rule now to be enforced by Legend.

“We’re just trying to make sure that, because nobody else is overseeing us, that we oversee ourselves in as responsible a way as possible.”