In a duel between former UFC title contenders, Thales Leites captured the vacant Superior Challenge middleweight title in a tight and protested decision against Jeremy Horn.


Advertisement
“My strategy was to wait and see his gameplan,” said Leites after the fight.

Horn decided to keep the fight standing in a wait-and-see match, leaving the judges a tight fight to decide.

The Nova UniÃ£o fighter's left leg was visibly damaged by the American's strategy to use low kicks in his standing arsenal. The “MMA legend,” as Leites referred to Horn, said he thought he'd have the edge on the feet, where the fight mostly played out.

Leites finished both the final two rounds strong; punches in the second and a takedown in the third, which may have given him the edge. After taking some punishment of his own, a second-period barrage for Leites hurt Horn with a series of punches. The final frame was settled as Leites finished a double-leg takedown that seemed to catch the American off guard.

The Brazilian has now gone 5-1 since parting ways with the UFC in August 2009, with his two most recent victories in the Swedish promotion. 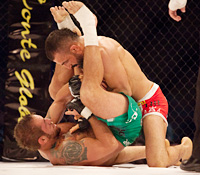 The fighters switched positions throughout the rounds, trading takedowns and submission attempts in a grappling affair that ultimately gave a unanimous nod to the Swedish prospect.

Round one found Clementi taking Mad Dog’s back, but was a close match. Round two ended with the American on top, and the third saw the Swede finish strong standing above his opponent.

“The unanimous decision is tough for me to swallow,” said a disappointed Clementi.

Daniel Acacio outworked Sweden’s Diego Gonzalez with jabs to complete his first Superior Challenge welterweight title defense. The Brazilian bloodied the local fighter, as the Stockholm resident tried to fight back with hooks and attempted shots. Acacio sealed the fight with his wrestling and elbows. 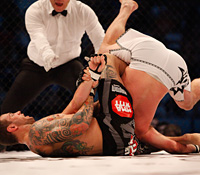 H. Wall
Carvhalho forced a tap.
Brazilian-born Swede Bruno Carvalho and Kyacey Uscola were locked quality scrap that ended with the Team Alpha Male representative yelling in pain. Advice from Urijah Faber couldn't help his fighter, as Carvalho locked up the wrestler in a nasty kimura, which ended the fight at 2:45 in round two.

Another top Swedish prospect, Assan Njie, added his name in discussion for top-middleweight status in Sweden as he put away Russia's Beslan Isaev with a first-round guillotine.

Hector Ramirez picked up a win against Matti Makela under bizarre circumstances. After two full rounds of spirited exchanges, Makela seemed to get seriously injured from a low kick, where his shin hit the knee of the
former UFC talent.

After retreating to put his back to the cage, Ramirez began taking free swings at the recovering Swede. Ramirez then appeared to throw an illegal elbow as a towel was thrown in the ring from Makela's corner. After some confusion, the fight was declared finished at 0:36 of round three.

In a matchup of top-10 European bantamweights, Sirwan Kakai submitted James Doolan with a guillotine at 3:07 of round two.

In her pro debut, Lina Eklund brought a frenzy to the Swedish crowd as she showed real standup skills in beating up Kristina Talvosaite of Lithuania. Although most of the damage was done on the feet, the former elite gymnast ended the fight with a rear-naked choke at 1:38 of the second period.

In other action, Tor Troeng took a unanimous decision over Robert Jocz; Mohsen Bahari stopped Farshad Farsiani by TKO after one round and Andreas Stahl took out Johan Vanttinen to open the night in a spirited fist fight that eventually put Vanttinen on the ground, forcing a stoppage at 1:12 of round two.

Ryan O'Leary blogs about MMA in Sweden at MMAViking.com and tweets at @MMAViking.