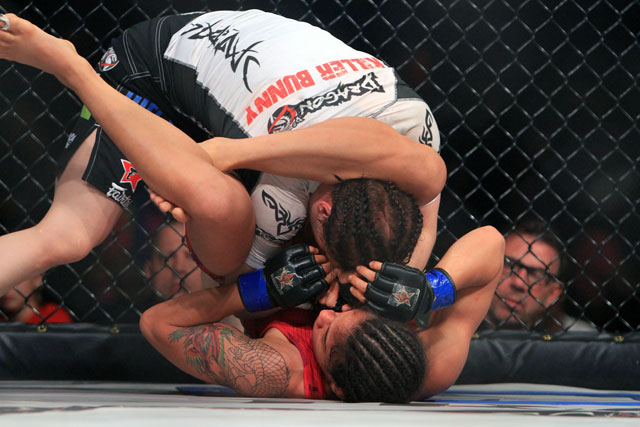 Souza submitted Katja Kankaanpaa with a fourth-round triangle choke to capture the organization’s 115-pound crown in the Invicta 12 headliner on Friday at the Municipal Auditorium in Kansas City, Kan. Kankaanpaa (10-2-1) requested intervention from referee John McCarthy 3:58 into round four, as she was finished for the first time in her 13-fight career.

The match entered the fourth round with the outcome still very much in doubt. There, Kankaanpaa bullied to the Brazilian to the mat and settled in half guard.

Souza (8-0) reclaimed full guard soon after and went to work from the bottom, badgering the “Killer Bunny” with elbows from her back, all while keeping her true intentions hidden. The unbeaten 24-year-old then isolated Kankaanpaa’s right arm, trapped her in the triangle and slowly squeezed out the resolve. The Finnish champion fought desperately to free herself, but Souza eventually broke her posture and elicited the tapout. 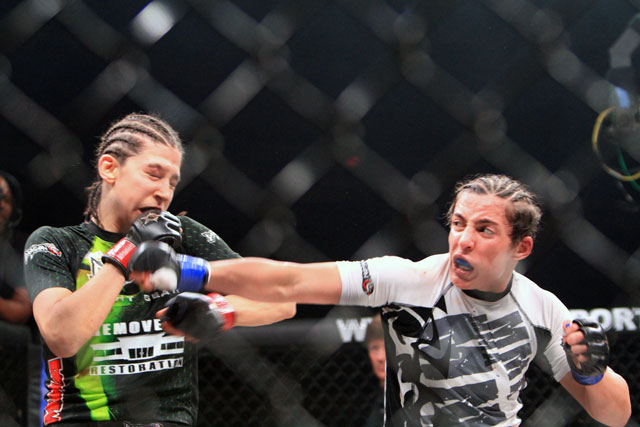 (+ Enlarge) | Photo: Jeff Sherwood/Sherdog.com
Porto got her revenge.
In the flyweight co-main event, Vanessa Porto avenged a 2008 technical knockout defeat to Roxanne Modafferi with a unanimous decision over the resurgent “Ultimate Fighter” alum. Porto (18-6) swept the scorecards with identical 30-27 nods from the cageside judges.

Modafferi (17-12) was effective in spurts, particularly with her jab and front kicks. However, Porto struck for takedowns in all three rounds, countered with some consistency, delivered an occasional heavy shot in the standup -- a forearm shiver to the face in the second round got the attention of “The Happy Warrior” -- and generally stayed out of range against her taller counterpart.

The 31-year-old Porto has rattled off three straight wins. 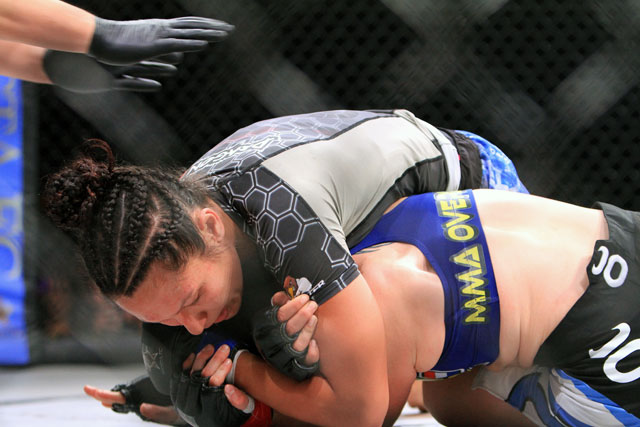 Van Duin (5-1) had to climb out of an early hole. Bell avoided an ill-advised armbar attempt, moved on top and dropped hammerfists on the Kiwi. She maintained her positional control for much of the first round and tried a heel hook in the waning moments, forcing Van Duin to stay on the defensive.

The bout took a dramatic turn at the start of the second frame, as Van Duin caught a kick, rushed “The Lady Killer” to the mat and ensnared her in a rear-naked choke during the transition. Bell scrambled to her knees but could not shake free, and, with the choke cinched, she was forced to submit. 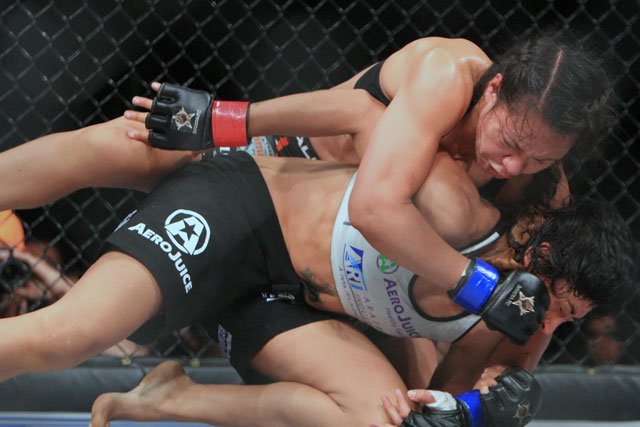 (+ Enlarge) | Photo: Jeff Sherwood/Sherdog.com
Pa’aluhi won her third straight.
Elsewhere, Xtreme Couture’s Raquel Pa’aluhi recorded her third consecutive victory, as she picked up a unanimous decision over Ediane Gomes in their bantamweight showcase. All three cageside judges scored it the same: 29-28 for Pa’aluhi.

After a competitive and frenetic first five minutes, the Hawaiian made her move. Pa’aluhi (5-4) enjoyed a dominant second round, where she worked her punches and kicks in concert, drove the American Top Team rep to the mat in pain with a knee to the gut and piled up points with ground strikes. She eventually moved to Gomes’ back and threatened with a rear-naked choke.

Sensing the fight was slipping away, Gomes (10-4) did her best to turn the tide in round three. There, the Brazilian executed a pair of takedowns and bottled up Pa’aluhi on the canvas with top control and ground-and-pound. Alas, the finish she needed did not materialize, as the 34-year-old was sent to her second straight defeat.

In other action, Latoya Walker (5-0) kept her perfect professional record intact with a unanimous decision against “The Ultimate Fighter” Season 18 graduate Peggy Morgan (3-3) in their featherweight scrap; Lacey Schuckman (11-8) stopped on overweight Jenny Liou Shriver (3-2) on punches 1:53 into round one of their duel at 115 pounds; Sharon Jacobson (3-1) captured a unanimous verdict over Delaney Owen (3-2) in their strawweight encounter, banking 30-27s across the board; Shannon Sinn (2-2) took a unanimous decision from Maureen Riordon (0-2) in a three-round battle at 125 pounds, earning 30-27, 29-28 and 29-28 marks on the scorecards; and Sijara Eubanks (1-0) put away Gina Begley (0-1) with punches 4:59 into the first round of their bantamweight clash.