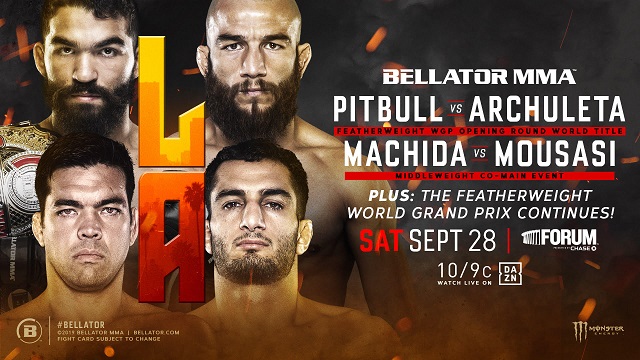 Bellator MMA is loading up its September return to Inglewood, California, by adding a pivotal middleweight rematch between Lyoto Machida and Gegard Mousasi to Bellator 228.

On Thursday, Bellator announced via press release that former Ultimate Fighting Championship light heavyweight king Machida (26-8) will face former Bellator MMA middleweight champion Mousasi (45-7-2) in a rematch of their 2014 battle at UFC Fight Night 36. They will meet in the co-main event of Bellator 228, which will take place on Sept. 28 at The Forum in Inglewood, California. Additionally, the promotion confirmed the previously reported headliner of featherweight champ Patricio Freire (29-4) against Juan Archuleta (23-1) as part of the Featherweight World Grand Prix.

When the two first met in 2014, Machida took a clear-cut unanimous decision over Mousasi across five rounds in Brazil. Machida is riding a four-fight win streak dating back to 2018, the longest since he began his career at 16-0. In his last outing, he leveled Chael Sonnen in the second round with a flying knee this June. "The Dragon" holds a knockout win over current two-division champ Ryan Bader, and in May spoke to his interest of facing both Mousasi and Bader again in the Bellator cage.

Mousasi dropped a highly-disputed majority decision to Rafael Lovato Jr. in June to snap an eight-fight win streak and lose his middleweight crown. Prior to the loss, "The Dreamcatcher" beat Rafael Carvalho and Rory MacDonald on his middleweight title run, and became the second Bellator fighter to win a title fight with elbow strikes when he finished Rory MacDonald. The first to do so was Carvalho, when he knocked out Alessio Sakara in 2017.

Bellator 228 takes place on Sept. 28 at The Forum in Inglewood, California. Headlining the card will be a featherweight title fight and grand prix bout between champion Patricio Freire and Juan Archuleta.