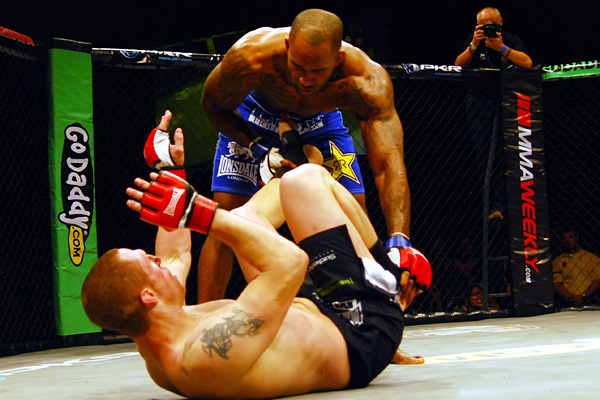 
NOTTINGHAM, ENGLAND -- Jimi Manuwa blew away Antony Rea in an exciting climax to the BAMMA 8 card at the Capital FM Arena on Saturday night.

The “Poster Boy” was stepping up in competition after his stint as UCMMA champion, but he was always in control against the Frenchman. In the closing seconds of the opening round, he unleashed a spinning back fist and followed it up with a head kick that wrecked its target. The bell saved Rea from the ground-and-pound follow up, but he was unable to answer the bell for the second.

Manuwa was typically laid back when he talked to Sherdog.com: “It was a good fight. It took me a while to work him out. Obviously, he’s a seasoned pro and he’s been in with some good guys but, in the end, I done what I do best.”

In the co-feature, Jim Wallhead scored a career-best win with a 48-second knockout of Joey Villasenor. In the first significant exchange, “Judo” buckled Villasenor’s legs with a brutal left hook. Roared on by a partisan crowd, he followed the American to the canvas and beat him to sleep with a series of crushing blows. 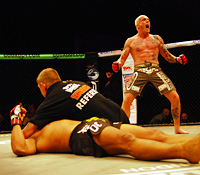 M. Rhodes
Wallhead lamped Villasenor.
“The left hook, that’s all I can remember,” an emotional Wallhead said. “He went down and I started with the ground and pound. I can ground and pound as well as anyone. Joey is a world class striker and to stand with him and do that is amazing. It feels f------ phenomenal.”

Andre Winner relied on his superior standup to take a decision win over Diego Gonzalez. The experienced Swede attempted to take the Leicester native down after being repeatedly stung by his fast hands, but Gonzalez never posed a viable threat. Winner came close to sealing the deal with killer knees late but had to settle for a unanimous decision, as all three judges saw the contest 30-27 in his favor.

Paul McVeigh was hoping for a successful return to the domestic scene after leaving “The Ultimate Fighter” at the elimination stage, but the “Dinky Ninja” never really got going against Erik Perez . The Mexican looked the sharper boxer throughout. In the final round, McVeigh outgrappled his opponent but never looked close to finishing the fight. Perez was a clear winner on the cards (30-27, 29-28, 29-28). 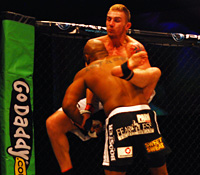 M. Rhodes
Mitchell hit a flying triangle.
Danny Mitchell finished his fight with “TUF” alum Dean Amasinger with a moment of brilliance. After a round and a half of grueling clinch war, the "Cheesecake Assassin" caught his opponent in sublime flying triangle. After Amasinger huffed, puffed and then tapped in submission, Mitchell milked the applause. “From the start, I knew I could catch him with that. I wanted to do something spectacular. Ideally, it would have been a knockout, but a flying triangle will do,” Mitchell said.

Those who dismissed the Jack Marshman versus Lee Barnes British title contest as a mismatch designed to showcase the KO power of reigning champ Marshman were proved wrong.

The serving paratrooper controlled the first two rounds on the feet, but Barnes took his best shots and rallied in the final round, connecting with punches that would have felled a lesser opponent. Marshman retained his belt on a unanimous decision (30-27, 29-28, 29-28).

For two rounds, ramrod standup and bombs dropped from the guard gave UFC veteran Curt Warburton a clear lead over Tim Newman. In the third, "Superhuman" Newman pulled out all the stops, as he threw punches with bad intentions looking for the comeback KO. Warburton hung in there to take a unanimous decision (30-27, 29-28, 29-28).

Colin Fletcher entered the arena on a tricycle wearing a clown mask, but he looked set to pay for his bravado when he was tossed around like a ragdoll early in his contest with David Round. Fletcher kept his cool in a couple of hairy situations then caught his opponent in a guillotine to end the fight.

Towering welterweight Tom Breese used his height to good effect, wrapping his long legs around Quasim Shafiq to secure victory by way of triangle choke late in the first round.

Home town boy Brent Crawley took Mark Platts’ back, flattened him out and then applied a decisive rear-naked choke 2:57 into the first round.