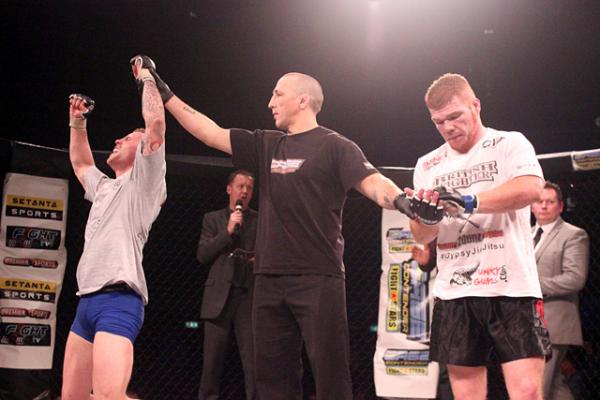 
LIVERPOOL, England -- Martin Stapleton scored a unanimous decision victory over Tom Maguire in the final of the Cage Contender Fightstars lightweight tournament at the Olympia in Liverpool on Saturday.

For three grueling rounds, the pair showcased the wrestling skills that had seen off the other contestants. “TUF” graduate Stapleton was the pick of many observers before the event and was roared on by a huge contingent of traveling fans, many of whom had made the trip from Rochdale.

Maguire’s route to the final had been tougher, and he was showing signs of fatigue in the third round. Stapleton, a former Royal Marines physical training instructor renowned for his cardio, took the lead in long passages of clinch fighting. Although he never had Maguire in significant difficulty, Stapleton increasingly dictated the shape of the fight, and there was no doubt that he would be the one who got his hand raised.

Throughout the evening, “Stapes” played to his strengths. In his first bout, he repeatedly took down Jamie Rogers. In the second half of the two-round contest, Stapleton planted his man again, unleashed some ground-and-pound and then attempted a kimura before clearly making the decision to conserve energy and hold position to see out the match.

In the semi-final, he came up against Arnold Quero. The likeable Frenchman thrilled the crowd in his bout against Mihail Kazuko, dropping the Italian every time they engaged in earnest before finally following him to the deck to end the argument inside two minutes. A shocker looked imminent early on in the semi when Quero clipped Stapleton early. Stapleton reverted to Plan A, taking the Parisian down and dropping short elbows. In the dying embers of the first frame, he fell back to snatch a heel hook and earned a tap with just one second left on the clock.

In the other half of the draw, Maguire advanced after he put Chris Stringer on his back and set about grinding his way to a decision win.

The other quarter final was far more dramatic. Mancunian Phil Flynn came forward and showed he was ready to go to war with Uche Ihiekwe. Unfortunately for him, The Kaobon fighter picked him off with a precision knee that brought the curtain down on his challenge.

Maguire’s subsequent clash with Ihiekwe brought a whiff of controversy. After the ref broke up a clinch stalemate, Ihiekwe threw a strike before the instruction to fight had been given. The unprepared Maguire took it in the eye and was clearly in distress, although the unsympathetic home crowd sided with their fellow Scouser and made it clear that they thought he was exaggerating to instigate a point deduction.

In the second stanza, it was business as usual, with Maguire dragging his opponent down into his world and punishing him with knees and elbows to buy himself a crack at his third Kaobon foe of the night. His eye held up, but Stapleton proved a step too far on the night.

Co-promoter John Ferguson was delighted with the way things played out.

“I'm over the moon,” Ferguson told Sherdog.com. “Chris (Zorba) doesn't do fantasy matchmaking. He puts together fights that put posteriors on the plastic and that's what it's all about. Put that together with the Cage Contender production values and you really can't fail. All credit to Stapleton for winning it, but all the fighters played their part in a great tournament and that's what made it special,” he continued. ”The atmosphere here tonight was electric. That will bring people back. The real winner here tonight is UK MMA.”

In addition to the tournament, a packed supporting card kept the crowd entertained. The Olympia is gaining a reputation as a prospects’ graveyard, and the latest bright young thing to fall was the highly touted Saul Rogers. Shay Walsh nullified the Team Colosseum fighter’s threat, gradually taking control then closing the deal with an arm triangle at 1:49 of the third round.

Other up and comers retained their unbeaten status. In the fight of the night, Mike Wooten dispatched the always-dangerous Alan Philpott with a third round triangle, while nonchalant 17-year-old prodigy Paddy Pimblett signed off his bravura performance against Dougie Scott with the same submission.

Alexei Roberts needed a mere 26 seconds to submit Dan Welsh with a keylock. Dan Rushworth caught Russ Smith against the fence and deployed spiteful knees that forced a TKO and, in the first fight of the night, Dez Parker scored with an armbar to defeat Lee Williams.