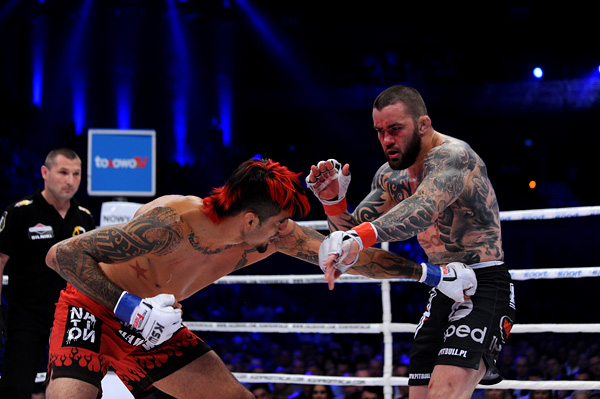 Michal Materla will square off with Jay Silva for a third time at KSW 26. | Piotr Pedziszewski /Sherdog.com


A middleweight title rematch between Michal Materla and Jay Silva will headline KSW 26.

Konfrontacja Sztuk Walki officials announced the pairing on Friday, revealing that KSW 26 will take place March 22 from Torwar Hall in Warsaw, Poland. The event will stream live on www.kswtv.com and will also feature KSW heavyweight champion Karol Bedorf, as well as an appearance from Marcin Rozalski.

Materla and Silva originally battled over the vacant middleweight title last year at KSW 19, with Materla emerging with a majority decision victory and the belt. The men then rematched this past September in a non-title affair, which ended when Silva knocked out the champion at KSW 24.

Silva, 32, halted a three-fight skid with his recent victory over the Polish champion. The 32-year-old began his pro career in 2008 and went on to compete for the UFC and Bellator before more recently fighting in KSW and the Alberta-based Maximum Fighting Championship.

After Materla captured the inaugural KSW middleweight title, he went on to defend it twice successfully before falling to Silva in their rematch, besting Rodney Wallace and then Kendall Grove. The 29-year-old owns 12 of his 19 wins by submission and has been stopped just twice in 23 pro bouts.