Jo, who defeated Shooto champion Mikihito Yamagami in his February promotional debut, went up against fellow Korean youngster Min Jong Song in the show’s main event at Park Chung Hee Gymnasium in Gumi, South Korea. The flyweights spent much of the evenly matched first round clinched on the fence, jockeying for position and exchanging knees to the body. Both men scored takedowns but neither could capitalize off of the quick scrambles which followed.

Although Song succeeded in bringing the fight back to the ground at the start of round two, his top position was nullified by Jo’s guard activity, as “The Running Man” had his head thumped with short punches and palm strikes from underneath. When Jo got back to his feet, he walked down Song with front kicks and heavy hooks before trying a guillotine choke and hitting a takedown to close the frame. 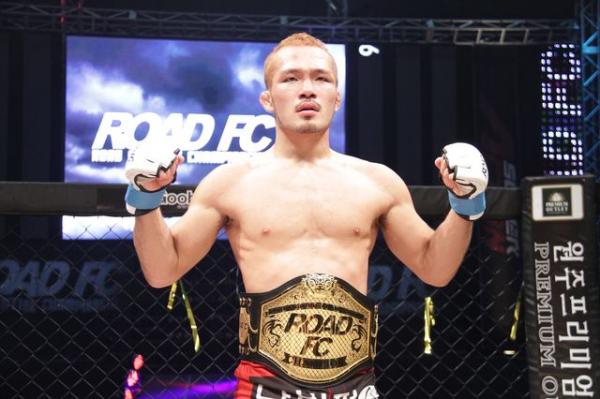 (+ Enlarge) | Photo: Lee Li/Sherdog.com
Nam Jin Jo claimed Road FC gold.
Clinch work dominated the third round, with Jo spending much of the final five minutes roughing up Song against the cage. Jo sealed the deal by reversing a late takedown and controlling Song for the last 60 seconds of the bout. When the official result was announced as a split decision for Jo, the Busan Team M.A.D. fighter had to be held up by the referee before collapsing in a heap of screams and tears.

Yoon threatened with a jump-guard guillotine in the opening minute, but Fukuda freed himself and then thwarted the Korean’s sneaky throws in close quarters. One such botched takedown attempt put Yoon on his knees, where he was overpowered and mounted by Fukuda. The Grabaka fighter clubbed a fetal Yoon with punches from back mount which forced a stoppage -- and silenced the partisan crowd -- at the 3:36 mark. 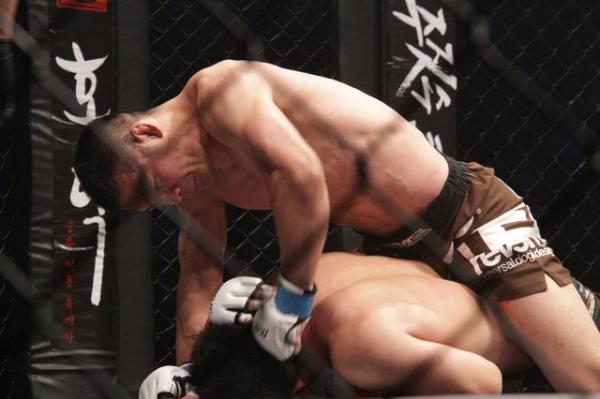 (+ Enlarge) | Photo: L. Li/Sherdog.com
Fukuda pounded Yoon to a stoppage win.
Brazilian lightweight Bruno Miranda showcased the skills he’s been honing at Thailand’s Tiger Muay Thai camp in his meeting with the more experienced Kwang Hee Lee. The 24-year-old Brazilian mixed takedowns with heavy, accurate punches and low kicks, remaining focused even as Lee mugged and clowned. A perfectly placed step-in knee to Lee’s ribcage ended the fight, as “Crazy” crumbled to the canvas in agony at 4:29 of round one.

The lone women’s bout of the card saw Hyo Kyung Song go up against Japanese visitor Hazuki Kimura in a 119-pound affair.

A kickboxer by trade, Kimura had no answer for Song’s ground game, which included ground-and-pound from full mount and armbar attempts in the opening stanza. When Song got another takedown and resumed the thumping, Kimura’s corner decided to throw in the towel at 2:10 of round two.

In a battle of debuting featherweights from the “Crying Fist” reality show, Hyung Geun Park completely overwhelmed Byung Hee Lim in a two-round rout. Park scored a near-instant takedown to open the fight, then attached himself to Lim’s back and went hunting for a rear-naked choke. When that didn’t work, the SSABI MMA product spent the remaining four minutes of round one bashing Lim with hammer fists from back and full mount. Aside from an early guillotine attempt, Lim didn’t fare much better in round two. After 10 minutes of domination, all three judges saw the bout in favor of Park.