SAO PAULO -- Saturday night inside Sao Paulo's Pacaembu Gymnasium, Wendell "Negao" Oliveira solidified himself as one of the top welterweights in Brazil. In the headliner of Jungle Fight 26, the Gracie Fusion athlete defeated Gil de Freitas by split decision (29-28, 29-28, 28-29) in a lively fight.

Better prepared and more focused, "Negao" dominated almost the whole fight, showing good striking and defense from de Freitas' constant attempts to take the fight to the floor. His great pace and ability to scramble back to his feet from de Freitas' takedowns tired and confounded his foe. Each and every time de Freitas completed a takedown, Oliveira stood right back up. "Negao" forced a striking battle with the grappler, whose standup skills lagged behind, leading to his second straight loss.

For "Negao," the win was his sixth in a row. He hopes that it will lead him north, to a bigger show in the United States.

“I've achieved this streak and now I feel ready to fight outside Brazil," Oliveira said after the bout. "I want so much to get a shot in a big show." 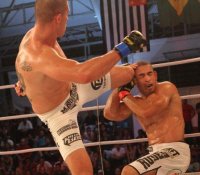 After five surgeries and two years inactive due to injuries, Rota lost first round, as "Giba's" takedowns, ground-and-pound and submission attempts overwhelmed him. However, as the fight wore on, Rota used his greater rich, head kicks, and knees that cut Galvao open and turned the tide of the fight.

Destabilized and tired, Galvao suffered in the third round. Rota, a product of Anderson Silva's Killer Bees team in Curitiba, clinched his foe along the ropes, punishing him and stopping his takedowns. Rota earned the split decision, and will now have the chance to vie for Jungle Fight's middleweight title.

Jungle Fight 26 was originally set to feature the entire four-man 185-pound bracket in one night. However, due to an undisclosed injury suffered by Marcelo Guimaraes in training, his semifinal bout with Ildemar "Marajo" Alcantara has been postponed. The winner of the bout will meet Rota for the Jungle Fight championship later this year.

However, the night's most impressive middleweight might have been debuting 18-year-old Norman Carlton. 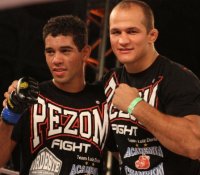 The teenager, a sparring partner of UFC heavyweight Junior "Cigano" dos Santos, stopped Peterson Chacal 55 seconds into the second round. With dos Santos and acclaimed boxing trainer Luiz Carlos Dorea in his corner, the young Baiano showed patience beyond his years, taking his opponent down at will and smashing him on the ground en route to the stoppage victory.

At 205 pounds, Thiago Perpetuo won a unanimous decision over Willians Santos, while Bruno Capelosa's brutal low kicks put Marcelo Cruz down at 1:35 of the third round. Cruz's left leg was so badly battered that he needed to be carried from the ring.

Dream lightweight veteran Adriano Martins got a first-round stoppage over Nilson Assuncao, when Assuncao's corner threw in the towel to save their man from a deep Martins kimura.