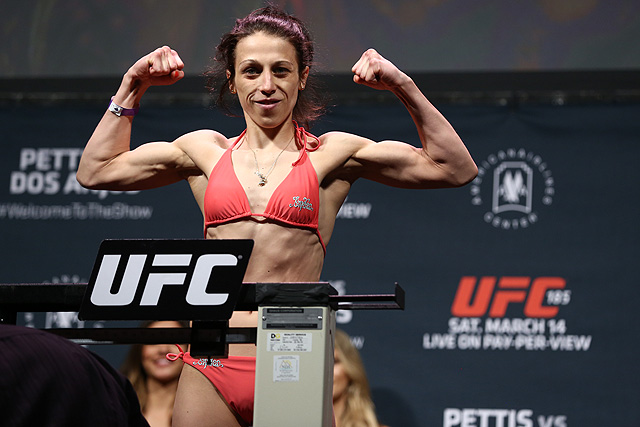 
Joanna Jedrzejczyk made good on everything she said during the leadup to UFC 185.

The Polish fighter overwhelmed Carla Esparza with powerful, accurate striking to become the second Ultimate Fighting Championship strawweight titlist on Saturday night. According to the new champion, this was a product of a newfound emphasis on training for wrestling.

“Like I said before, I was working so hard on my wrestling, but no one believed in me. I’m not a striker anymore, I’m a complete mixed martial artist,” Jedrzejczyk told Fox Sports after the bout. “I still cannot believe that I’m the first European-based champion. After every fight, I’m so happy on the inside and the outside, but after this one, I’m more happy on the inside for my parents, for my boyfriend and for my country -- for everyone. I’m going to take my belt back to Europe and show everyone. I’m just so happy.”

Now with three UFC appearances under her belt, Jedrzejczyk can turn her attention to defending the title against a plethora of game opponents. According to the 27-year-old, this is what she was born to do.

“I can feel really good in the Octagon. I was born for it, I think. I’m an [easygoing] person, but when I’m in the Octagon, I go crazy,” Jedrzejczyk said. “I was ready for her takedowns. I’m natural. Just me. I’m funny Joanna from Poland. That’s all.”

It’s back to the drawing board for Esparza, who took nothing away from her opponent in defeat.

“There’s no excuses when it comes down to a fight,” Esparza said. “She had great takedown defense, but I feel like I wasn’t really setting it up, but that’s on me. I fought my fight and I lost tonight. She did a great job.”

The loss snapped a five-fight winning streak for Esparza and marked her first defeat since a 2011 split decision against Jessica Aguilar at Bellator 46.