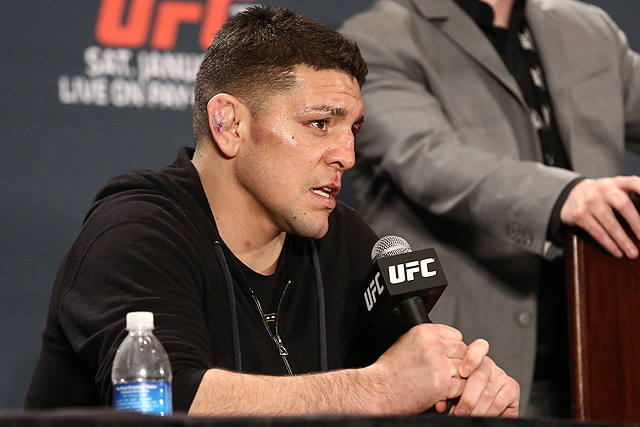 Nick Diaz may not have to sit out for five years after all. | Photo: Dave Mandel/Sherdog.com


Nick Diaz could be eligible to return to the Octagon as soon as 2016 if all goes well with the Nevada Athletic Commission.

According to multiple outlets, the popular UFC star and his counsel are in the process of negotiating a settlement with the NAC that could allow Diaz to fight again sometime next year. Legal analyst Amy Dardashtian first brought word of a potential settlement via Twitter.

“Just spoke with my legal team at Campbell & Williams and talks with the [Nevada] Athletic Commission are going well,” Diaz wrote on Instagram. “We’re working hard with them to get this right. Thanks for the support.”

The Diaz situation is not expected to be addressed during Thursday’s NAC hearing.

Diaz was suspended for five years and fined $165,000 for testing positive for marijuana following his bout against Anderson Silva at UFC 183 on Jan. 31. It was Diaz’s third failed test in Nevada. However, only one of the three samples Diaz submitted at UFC 183 was above the minimum threshold for marijuana in the state.

Diaz’s punishment sparked outrage both in and out of the MMA community, and prominent fighters such as Ronda Rousey and Georges St. Pierre have expressed support for the Stockton, Calif., native in the aftermath of the ruling. In addition, a White House petition to overturn the suspension garnered more than 100,000 signatures.