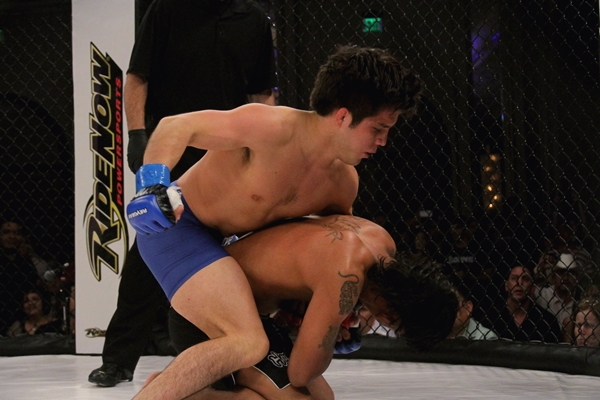 TUCSON, Ariz. -- Five years and more than 6,000 miles removed from the pinnacle of his wrestling career, Olympian Henry Cejudo stepped inside a cage Saturday night for his mixed martial arts debut.

Behind the curtain, a hyped Cejudo burst out of a set of Casino del Sol’s 15-foot double doors to await his cage walk. The enthusiasm rolled over into sedation for Cejudo as Poe’s walkout song took longer than expected. Dressed in a blue T-shirt and sweatpants marked with a matching USA logo, the 135-pound Cejudo sat in a nearby chair and waited alone with a calm anticipation.

When his name was called by the cage announcer, Cejudo strolled through a thick smoke machine entrance and emerged before the 2,000 spectators jammed into the casino’s conference room. Backed by his own MC, who provided a personalized hip hop walk-out track, Cejudo made his way to the cage to a respectful response from the local crowd. The rap track, sung by a childhood friend of Cejudo’s, was carefully paced to end the moment the MMA rookie made his first step into the cage.

At the opening bell, Cejudo rushed full-speed at Poe, who backpedaled and caught Cejudo with his first live punch. A glancing left hook from Poe woke up the amateur wrestler of 26 years.

“It was different. It’s a little faster paced here. I was a little shocked,” said Cejudo after the bout. “That dude has a pair of cojones on him. He just came out swinging. He caught me with a shot but it was nothing crazy. I don’t like getting hit. I really work on my defense a lot, that’s what makes me a good fighter. It’s part of the sport, getting hit.”

Poe followed up with a spinning back kick that grazed Cejudo’s midsection. Seconds later, before Poe could formulate a follow-up combo, Cejudo drove his opponent to the ground with a powerful takedown. The single, effortless motion put Poe on his back and on the defensive.

Looking for positional control, Cejudo held down Poe. With ground-and-pound not finding the mark, Poe threw up triangle choke and armbar submission attempts that made Cejudo aware but did not put the Phoenix fighter in danger. Still in Poe’s full guard, Cejudo found a home for a rapid succession of right hands. Moments after the first significant offense of the fight connected, the referee inside the cage called a halt to the contest, giving Cejudo the first-round TKO win and Poe his fifth consecutive loss.

The early stoppage was met by a chorus of halfhearted boos blended with cheers from the sold-out crowd. The quick trigger by the referee ended Cejudo’s inaugural MMA fight in less than 90 seconds. After a lifetime of getting his athletic fix on wrestling mat, Cejudo welcomed the butterflies that came with trying a sport foreign to him.

“It’s actually easy. It’s kind of a pleasure. He comes in the gym every day and wants to learn,” Silaraup explained. “The striking game, the submission game, transitioning from the striking to the takedown, all the way to the submission; he’s evolving every single day. He already has an awesome base for MMA. For me, it was just sharpening him up and having fun.”

With an ambitious schedule of one fight per month for the remainder of 2013, Cejudo is not shy about predicting where he wants to be viewed in his new sport.

The night’s main event saw two-time UFC welterweight Edgar Garcia move up to 185 pounds to square off with late replacement Leroy Fornof for the WFF middleweight title. Off a scramble, Garcia caught Fornof with multiple strikes. The wounded Fornof was ripe for a finish, and Garcia cranked on a quick kimura for a no-hesitation tap out at 1:54 of the first round.

In other pro action, featherweight Michael Parker took on Julian Samaniego for the WFF 145-pound belt. Parker outworked his opponent once the fight moved to the ground and eventually forced Samaniego to submit to a triangle choke at 1:52 of round one.