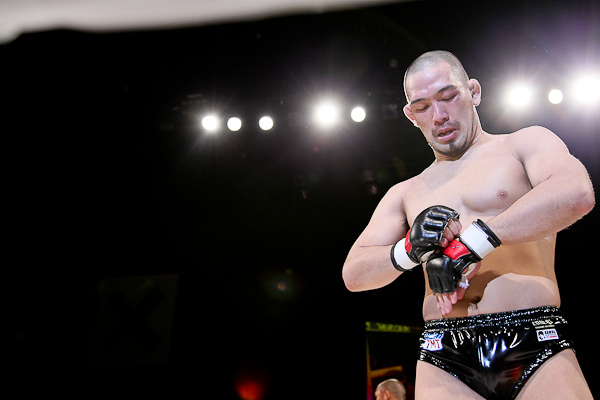 The opening frame of the tournament final went solidly for Kawamura, who also serves as Pancrase’s president. The first half saw both men missing with strikes due to the range they kept, though Kawamura arguably pulled ahead thanks to his snapping leg kicks. Not content to settle, Kawamura stepped up his offense in the latter half of the round, landing hard right hands and a superman punch on the backpedalling Nagamura. 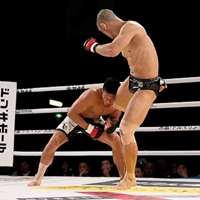 T. Irei
A knee won Kawamura gold.
Kawamura kept to this pattern in the second period, but caught his break when Nagamura ducked and swayed to avoid a big punch. With his head low, it was in perfect position for a Kawamura knee to the face. Nagamura stood up straight then and wobbled like a fish out of water before falling straight back into the ropes. Seeing Nagamura in imminent danger of eating more blows, referee Masato Fukuda dove for the save at the 2:18 mark.

“I’m a CEO and a fighter, but after tonight, I’m finally proud of myself as a fighter,” said Kawamura post-fight. “I’m glad I got the KO, but this tournament doesn’t feel like it’s over. I only had one fight last year, so today feels like I’m finally ‘back’ as a fighter. The middleweight pool isn’t very big, but it’s my hope that strong fighters will come to challenge me and try to take this belt.”

With the thunderous knockout victory, Kawamura walked away with the evening’s $400 “best KO” award.

Before capturing his second Pancrase belt, Kawamura had to get through Yuji Hisamatsu in the evening’s semifinals. Much like his championship performance, Kawamura’s strategy was to out-strike “The Pink Typhoon” with volume on the feet, while Hisamatsu instead sought to tie up in the clinch and go for takedowns. Kawamura’s plan won out in the end, as he marked Hisamatsu up with a number of punches and reversed his way into top position in both rounds. Judges Kenji Kosuge, Hirokazu Takamoto, and Taku Aramaki all gave the fight to Kawamura, 20-19.

Kawamura’s partner for the tournament final, Nagamura, similarly had to defeat part-time pro-wrestler Hikaru Sato earlier in the evening. Sato, who hadn’t seen the Pancrase ring since February 2009, was given a rough homecoming courtesy of the Team Cloud fighter.

While the cosplaying middleweight dove desperately for takedowns and leg locks, Nagamura peppered him with stiff jabs and hard right hands. Nagamura almost gave the fight to Sato after blowing rear-naked choke and armbar attempts, whereupon Sato leaned back for a number of Achilles hold tries at the end of round two. Thankfully for Nagamura, judges Takamoto and Kosuge gave him 20-19 nods, while judge Aramaki gave him a 20-20 “must” decision.

Kiyotaka Shimizu got to keep his 125-pound Pancrase title, albeit by way of an unsatisfying majority draw with challenger Seiji Ozuka. 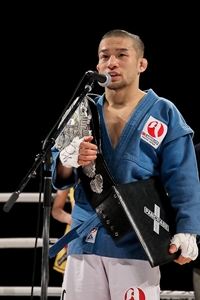 T. Irei
Shimizu eked out a title defense.
Early in the fight, it appeared as if the champion had the fight in the bag as he easily outmaneuvered Ozuka, circling and peppering him with stinging punches and low kicks. Shimizu curiously slowed in the second and third rounds, allowing Ozuka to step up his aggression. Where the challenger couldn’t initially match Shimizu for speed, accuracy or scramble ability during takedowns, “Oz” was putting hands on the champion and stuffing shots in the latter half of the fight. Thus, judges Aramaki and Yoshifumi Oyabu saw the fight an even 30-30 and 29-29, respectively, while judge Tomoki Matsumiya ruled it a 30-29 Shimizu fight.

“I’m unsure about the results, but I defended the belt and that’s the important thing to me,” said a diplomatic Shimizu after the bout.

Though neither fighter walked away with the more satisfying “W,” both were nonetheless rewarded for their efforts with the evening’s $400 “best bout” bonus.

Welterweights Keiichiro Yamamiya and Yukinari Tamura had a close bout where, in typical fashion, the southpaw Yamamiya chose to keep his distance and pepper his opponent with quick punches. Tamura favored low kicks in the opening frame, but eventually opened up his arsenal to include looping hooks. This played directly into Yamamiya’s game, however, as he bullied the natural lightweight against the ropes with even more punches until the final bell. Judges Matsumiya and Aramaki both saw the fight 20-19 for Yamamiya, while judge Fukuda saw it a 20-20 draw.

At 125 pounds, Yuki Yasunaga and Isao Hirose fought a tense, tactical two-rounder in which the Tokyo Yellow Mans product edged Tomiyama on the scorecards. With both fighters offering little offense outside of low kicks for the first half of the opening frame, referee Toyonaga warned both fighters for inactivity. The warning only helped a little, as Yasunaga stepped up his punching in the clinch and added a few takedown attempts for the rest of the bout. Hirose showed excellent balance and takedown defense, but ultimately gave up his back in the rear waist-lock several times, tipping the scales 20-19 for Yasunaga on judges Tomiyama and Fukuda’s cards. Judge Umeki saw the fight an even 20-20. 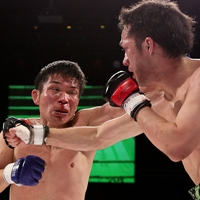 T. Irei
J-Taro and So slugged it out.
Capping an entertaining evening of bantamweight bouts, Tatsuya So and Masaya Takita had arguably the most energetic and evenly matched of the bunch. “J-Taro” put the pressure on So early, charging in with wild punches and kicks to the body. The Okinawan transplant responded in kind with sharp counterpunches, but was eventually forced to go for takedowns when the punches became a little too much.

Though So was able to bring the fight down, his inability to sink his hooks or triangle the body before taking back mount cost him the position in the first. He learned his lesson by the second frame, but did nothing to capitalize from back mount then, resulting in even 20-20 and 19-19 cards from judges Umeki and Tomiyama. Only judge Toyonaga saw the fight 20-19 for So.

Bantamweight Yuta Numakura took a commanding decision over 18-year MMA veteran Masahiro Oishi, plunking the former Shooto 132-pound champ with a barrage of hard southpaw punches. The longtime veteran couldn’t defend against the speed nor accuracy of his younger opponent as he ate punches while closing in to look for takedowns. When the fight did hit the ground, it was on Numakura’s terms, as he dropped punches from above on the hapless veteran. Though Oishi survived to the final bell, judges Umeki, Oyabu and Tomiyama all saw the bout for Numakura with scores of 20-19, 20-19 and 20-18, respectively.

Shoko Sato quickly put away Masaomi Saito in their bantamweight bout, though the result was hardly definitive. After sparking Saito early with a stiff right hand, Sato put his opponent in further danger when he followed up with a soccer kick and punches to the side of the Takada Dojo product’s head. The violence was too much for referee Masato Fukuda, who jumped in to call the bout at 1:04 of the first, even as Saito scrambled for Sato’s legs. 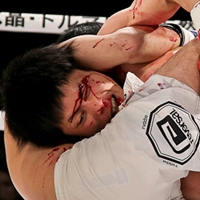 T. Irei
Matsunaga was sliced early.
Takehiro “Tiger” Ishii made the successful transition from Shootor to Pancrasist by cutting open fellow 120-pounder Yoshihiro Matsunaga. Ishii started the bout with a barrage of high kicks, one of which opened a cut over Matsunaga’s right eye during a takedown attempt, prompting the ringside physician to call the bout at the 1:54 mark.

Despite yet another example of the ring’s unsuitability for modern MMA, welterweight Kenji Nagaki successfully got around the anachronistic impediment to punch out Pancrase mainstay Yuki Kondo. Nagaki dropped Kondo several times over the course of two rounds with big punches, but the savvy veteran made sure to scramble beneath or between the ropes to minimize follow-up damage and force referee resets. Regardless, Nagaki stayed aggressive and eventually pinned Kondo in the mount, dropping punches around the ring ropes until Kondo’s corner threw in the towel at the 2:40 mark of round two.

In the evening’s sole women’s bout, featherweights Kyoko Kimura and Mizuho Sato fought to a lackluster draw. Sato was able to get a few moments above Kimura in the grappling, but Kimura’s pawing punches minimized these compromising instances. Judges Takamoto and Tomiyama ruled the bout 20-20, while judge Wada saw it 19-19.

Flyweights Takuya Eizumi and Masakazu Utsugi fought to a competitive, two-round draw earlier in the evening while featherweight Naoki Tajima went blow-for-blow with Shinya Irei to get by with three 20-19 scorecards and a unanimous decision.
SHARE ON FACEBOOK SHARE ON TWITTER
Related Articles
Latest News
+ VIEW MORE