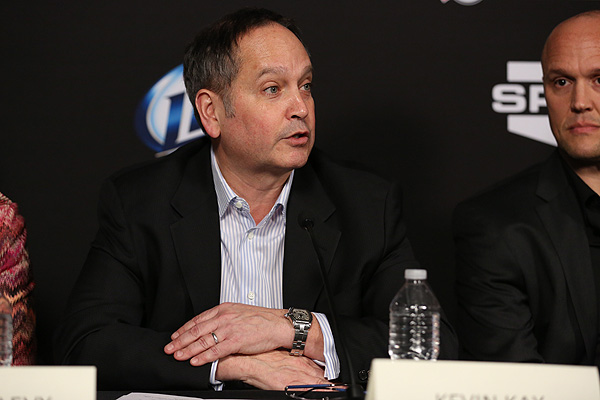 With the first season of Bellator MMA on Spike TV in the books, Sherdog.com recently spoke with Spike President Kevin Kay. The executive shared his thoughts on the tournament-based promotion’s latest offering, the future of light heavyweight star “King Mo” Lawal and whether Bellator has had its “Griffin-Bonnar moment” yet.

Sherdog.com: Could you identify one thing you liked most about Bellator’s eighth season and one thing you’d like to adjust in the future?
Kevin Kay: Sure. The thing I liked most is, I really feel like Bjorn [Rebney, Bellator CEO] and his team put on great fights. Honestly, no matter what we did at Spike -- and I feel like we did some good things -- just the quality of fights and the fact that, week after week, there were amazing finishes. Not just one good fight on every card, but tons of great fights on every card. You look back at Emanuel Newton knocking out King Mo, to David Rickels coming into the ring with the dinosaur -- they’re just great moments. Doug Marshall kind of emerging as the crazy character that he is, and then [Michael] Chandler’s domination, [Ben] Askren -- you’ve never seen an Askren fight like that before. And Pat Curran -- just wow. Every week, I think the fans got great fights, and I think that’s what we set out to do. That’s why people watch, and that’s why people come back week after week. The fights are always my favorite part of everything.

The other thing we did was the Bellator app. Creating that app and launching it mid-season and having over 100,000 people download it just on Apple -- it hasn’t even launched on Android yet -- and giving the fans an experience that’s new and different. It’s a second-screen experience, letting the fans vote based on CompuStrike data and their own opinions, and then integrating it into the show so Jimmy [Smith] and Sean [Wheelock] are talking about the fans as the fourth judge and getting them involved. I just thought that was a great step forward for the sport and a great way to engage fans in a way that hasn’t been done before, so I’m really proud of that.

On the “what could we do better side,” well, it’d be better if King Mo didn’t get knocked out. That’d be the one -- well, actually, I say that and I’m joking around, because actually, the week after Mo got knocked out, our ratings went up really significantly, by a couple hundred-thousand viewers, I think. And I believe that’s because the Mo knockout got so much attention that it was another kind of brand-identifying thing and people tuned in the next week to see what was going to happen, having heard about Bellator the week before. So, it actually worked for us in a lot of ways.

The serious thing that I would say we can do better is: I think we did a nice job of letting the audience know that Bellator is tournament-based -- that’s what sets it apart from all the other promotions -- but I think we can do an even better job in explaining how the tournaments work, who’s in them and which one is taking place, so that the fans are really clear about what they can expect each week in terms of the tournament. That’ll be part of what we try to address this summer.

Sherdog.com: King Mo was obviously a big part of the plan, not just for Bellator but also Impact Wrestling on Spike. Aside from the ratings bump, what kind of effect has his knockout loss had?
Kay: He’s going to come back and fight in the Summer Series, so we can’t wait to get him back in the cage. I think people will be really interested to see what he does different this time. I’m excited. I love Mo. I think he’s everything you want in a mixed martial artist, right? Because he’s incredibly gifted as an athlete, he’s very versatile and he’s got a great personality. So, you know, nothing changes. I’m now curious to see what he does, as I think the fans are. How’s he going to adjust his game plan and is he going to be able to win a tournament and win a championship in Bellator?

The only thing it changes a little bit is that we thought there would be more time. If Mo had won the tournament, then he would have not had to fight this summer, probably would have gone to TNA for the summer and then come back in the fall to fight in Bellator again. But because we want to get him back in the cage and give him as fast a shot as possible to get back up and running and hopefully win, we’re going to get him back on this summer. So, he won’t go as quickly back to Impact as we originally had planned, but that’s all good.

Sherdog.com: The upcoming light heavyweight tournament King Mo will be part of is a four-man bracket. What was behind the decision to switch the format for the Summer Series?
Kay: We just don’t have as many fights, so we can’t do eight, because it’s basically a three-episode arc, the Summer Series. I think Bjorn felt it was important to get a number of tournaments in there. A four-man tournament is more executable in terms of getting all those fights on TV.

Sherdog.com: The season which just ended averaged about 800,000 viewers for live broadcasts. Is that in line with what you expected? And for a TV layman, is there any major significance that would come with breaking the million-viewer mark?
Kay: I think the average was about 860,000, and I think three of the events went over 900,000. With the immediate repeats, we were always over a million viewers. For me, I never set ratings expectations, because you’re always wrong. Doing that just seems silly, in a way. But, in my mind, I was like, “OK, where do we want to be?” And this is a really good place to be for the first season. What I love about it is that we launched to 900,000 viewers, we had some significant competition in there -- [the] NCAA [men's basketball tournament] and stuff like that -- and then we ended up bringing all those 900,000 and more back. It feels like a really good place to be.

Now, that said, my job is ratings growth, and there’s plenty of room for growth in those numbers. I think that, as we get into the summer and the fall, when you have all these guys who have fought and who people now know -- Michael Chandler, Pat Curran, Emanuel Newton, Alexander Shlemenko, David Rickels -- I believe that they’re going to come back and want to see them. I think the word spreads and more people want to see them because they put on great shows. So, I feel like we have very significant room for ratings growth. We’ve got the reality show coming this summer, which is another way to showcase Bellator with some great talent, because you’ve got Randy Couture, Frank Shamrock, Greg Jackson and Joe Warren, which is kind of an amazing lineup of coaches. It’ll be a very strategic look at how they do their business and how they train and how guys bring different approaches. All those things are going to continue to help build the ratings.

Sherdog.com: Speaking of the reality show, is “Fight Master” done filming?
Kay: We’ve completed filming and we’re in post-production now. The only thing left is the final outcome between the two guys, but that happens later. That will happen live on a Bellator card in September.

Sherdog.com: Is there a premiere date set for the show?
Kay: We have not announced a premiere date yet. We’ll probably announce that in a couple of weeks. It will run over the summer, and the finals of the reality series will actually happen at the beginning of the ninth season.

Sherdog.com: Is there more Bellator programming to come on Spike? Will there be highlight shows to fill the gaps between seasons?
Kay: We did that “King Mo: Unrivaled” special. We’re doing more of those on our champions that will line up with their next fights, and there are a couple other ideas out there. I’m talking to Frank Shamrock tomorrow about doing something to re-educate fans about Frank and his amazing career as we get ready to launch the reality series. So, there’s a number of shows and programming ideas that you’re going to start to see leading up to the reality series and the Summer Series.

The focus, for me, was like, the first season, let’s promote the tournament, that it’s on Spike, and let’s make sure everybody knows where it is and what it is. Then, it’s like, let’s make sure we’re doing the same for the reality series and be very focused about that. Then, we can roll out more shows and programming over the summer, once we’ve built up these stars. To ask the audience to watch shows about guys they don’t know would not be a good idea. To ask the audience to watch shows about guys they’ve experienced and now seen fight, and dive deeper on them, I think is a really good idea.

Sherdog.com: You’ve described the Forrest Griffin-Stephan Bonnar fight on “The Ultimate Fighter” as a seminal moment. Do you think Bellator has had that moment yet, or is that yet to come?
Kay: I think we had a lot of great fights. I mean, the Griffin-Bonnar fight is going to be tough to repeat. Remember, the sport, in terms of widely distributed cable TV, was in its infancy. That was the first season finale of “The Ultimate Fighter,” which was a new show. There was a tremendous expectation. It’s a legend now, right? So, it’s going to be tough to repeat. When I look back on this season, I just think Emanuel Newton’s knockout of King Mo was such a stunning moment for Bellator. Now, was it Griffin-Bonnar? No. I think that’s still to come. But that was -- you know, I stood up. I couldn’t believe what I was seeing.

Also, the first fight, Curran versus “Pitbull” [Patricio Freire], just set a standard for the fact that, if you tune in to Bellator, you’re going to see great fighters in great fights. That’s what we’re trying to do here. Along the way, there’s going to be some amazing fights, and that’s what we want fans to know. If you tune in, every week, you’re going to see some amazing fights on Bellator.