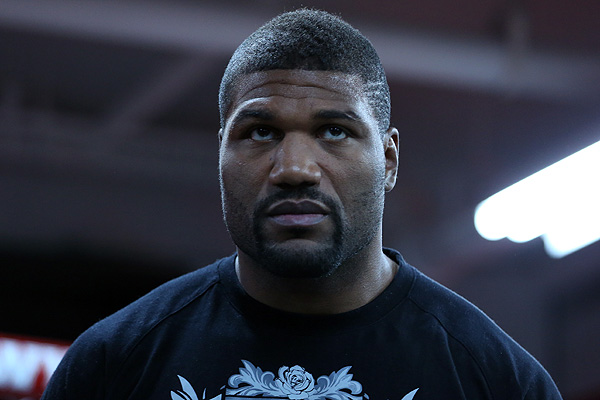 Quinton Jackson had some incredible moments in Pride.

He debuted in the promotion against Kazushi Sakuraba, upset Igor Vovchanchyn and stopped Chuck Liddell. However, his most memorable moment came in June 2004 when he slammed Ricardo Arona into unconsciousness.

“That was a great moment for me because it was my first fight back since I broke my hand,” Jackson told the Sherdog Radio Network’s “Beatdown” show. “I was kind of upset at Pride for not giving me a warm-up fight. Arona was a real tough guy, and if you go back and watch that fight, Arona was actually kicking my butt. He was kicking my ass, honestly.”

“He was giving me those mean leg kicks,” Jackson said. “If Arona would have kicked me in the leg one more time, I probably would have showed the pain and went down. … Out of all the fights I’ve ever been in, even the K-1 fight, Arona had the hardest kicks I ever felt in my life. He was kicking me right in the same spot over and over.”

After the fight moved to the ground, Arona battered “Rampage” with more kicks from his back.

“He dislocated my jaw, and I went down to recover and to block the heel kicks and he told the referee I was knocked out,” Jackson said. “That pissed me off.”

To make matters worse, Arona slapped on a triangle choke. By then, though, Jackson had lost his temper. What followed was one of the most brutal slams in MMA history, as “Rampage” lifted his opponent overhead and powerbombed him back to the mat, ending the fight 7:32 into the first round.

“I just don’t think it’s fair if I lose my temper because honestly, I probably could have killed Arona if his head would have landed wrong, or I could have broke his neck, and that would have been on my conscience for the rest of my life,” Jackson reflected.

“Thank God it only knocked him out and he was OK. That was the only time I ever lost my temper. I just hope I never lose my temper in a fight again.”

Listen to the full interview (beginning at :54).