ATLANTIC CITY, N.J. -- Friday night was a mixed bag for Kurt Pellegrino’s understudies at Ring of Combat 35 inside the Tropicana Showroom.

“I knew going in that he was a good striker,” the Team Lloyd Irvin fighter told Sherdog.com after the bout. “But I just wasn't worried about it. I trust my takedowns. My hands get around you and you're going down.”

After securing another takedown in the third frame, Harshbarger took Sullivan's back and worked a rear-naked choke that he looked close to wrapping on a few occasions over the last half of the round. Despite the winning the belt, it gives the now-6-2 Virginian something to work on for his next bout.

“I was so close,” Harshbarger said. “I can't believe I didn't finish that choke. I'm very disappointed in myself. I'm going to have to go back and look at the tapes and see if I was messing around with body position and where I should have snuck in a little more boxing to finish the choke.” 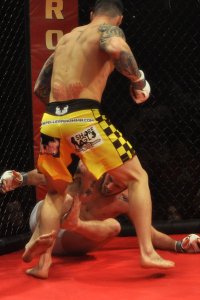 “George fought a wrestler that obviously wanted to take him down and hold him down. He wasn't really damaging him a lot, but the guy did his job and took George out of his game,” said the UFC lightweight. “It's a heartbreaking loss for George because he's had so many better fights and better performances. That's MMA. Tonight was his night and I was proud of him and he'll be back.”

However, Pellegrino MMA rep Justin Haskins took the ROC northeast lightweight belt, stopping Liam Kerrigan at 3:52 of the first round. The move to lightweight might have been all Haskins needed to jumpstart his career.

“I think he got into the WEC a little too fast and now he's home with me. He was at 170 and I always told him that it might be a little too big for him,” commented Pellegrino on his charge.

“He's my height but he's a monster, really. I said to him you can't quit at 155. It's my weight class. I always tell people this kid is better than me. When Haskins realizes that he's better than me, good luck to whomever he fights.”

C. McGuigan
Liguori (right) was the aggressor,
but didn't get the nod.
The ROC cage was good to Russia's Mikhail Malyutin again, as the M-1 veteran took a contentious split decision over UFC veteran Chris Liguori.

Malyutin was the superior boxer from the outset, but was conservative and looked only to counter. Liguori was the fight's true aggressor, but struggled to land solid in what was mostly a striking stalemate. When Malyutin threw, he landed, but it was terribly infrequent.

In a middleweight bout pitting two of the most intriguing prospects on the card against one another, Team Tiger Schulmann's Uriah Hall delivered the "Knockout of the Night" against Aung La Nsang. 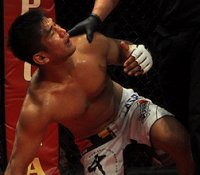 C. McGuigan
Nsang was smacked by Hall.
Coming off a foul-ridden decision loss to UFC vet Constantinos Philippou in February, Hall came out all guns firing. After taking the first two rounds, Hall threw out some feeler-type strikes early in round three, all to set up a rugged right hand that ended Nsang's night. After connecting, the Tiger Schulmann's product stepped away from Nsang knowing the fight was over, as Dan Miragliotta called a stop to the bout at 1:37 in the final round.

Hard-luck UFC veteran Sean Salmon returned to action against local light heavyweight Tom DeBlass, but it was a short return for the Ohio journeyman. After the bout hit the floor, DeBlass cinched up an Achilles lock that forced Salmon to tap out at 57 seconds into round one. The loss was the fifth straight
for Salmon, who is now 3-9 in his last 12 outings.

Featherweight Evan Chmieleski scored a well-timed knee against Ryan Vaccaro to record the knockout at 3:35 of the second round. Chmieleski put the action on Vaccaro for each of the two periods before scoring the knockout over the Long Branch, N.J., native. It was Chmieleski's second win after going 1-1 in ROC last year.

In the evening's only heavyweight bout, J.A. Dudley of Keasbey, N.J., took a very sloppy three-round unanimous decision (29-28, 29-28, 29-28) victory over Joe Abouata. On the back of three takedowns, Dudley won the first two rounds with scant offense, and survived an onslaught from Abouata off his back in the third to eke out the win.

Denville, N.J.,'s Claudio Ledesma scored a submission win over Michael LaDuke, locking up a rear-naked choke 43 ticks into the second round of their fast-paced bantamweight bout.

Featherweight Donnie DeFilippis needed less than two minutes to choke out Brian Smiley, notching the rear-naked choke tap at 1:52 of the first round, while fellow 145-pounder Anthony Facchini of Team Oliveira guillotined Mike Benoit at 3:04 of the first round.