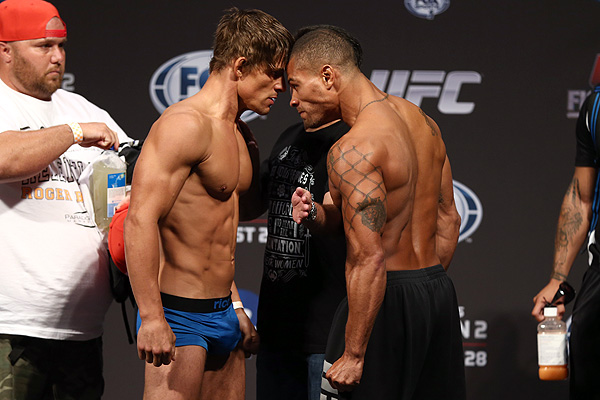 Roger Bowling and Abel Trujillo are set to run it back in December. | Dave Mandel/Sherdog.com


Roger Bowling and Abel Trujillo will do battle for the second time on Dec. 14, when the welterweights collide at UFC on Fox 9.

Bowling and Trujillo first met in August at UFC Fight Night 27. That bout was controversially ruled a no-contest when Trujillo landed what was deemed to be an illegal knee strike to the head of a grounded Bowling, who could not continue after sustaining the blow and a hard follow-up punch.

Prior to that result, Bowling had lost back-to-back fights, dropping a unanimous decision to Tarec Saffiedine to close out his Strikeforce career before suffering a second-round knockout at the hands of Anthony Njokuani in his April 20 Octagon debut at UFC on Fox 7.

Trujillo saw a five-fight winning streak snapped in his sophomore UFC effort, as he was outpointed by Khabib Nurmagomedov this past May at UFC 160. Prior to that setback, “Killa” was victorious in his promotional foray, stopping four-time NCAA Division III wrestling champion Marcus LeVesseur last December at UFC on Fox 5.