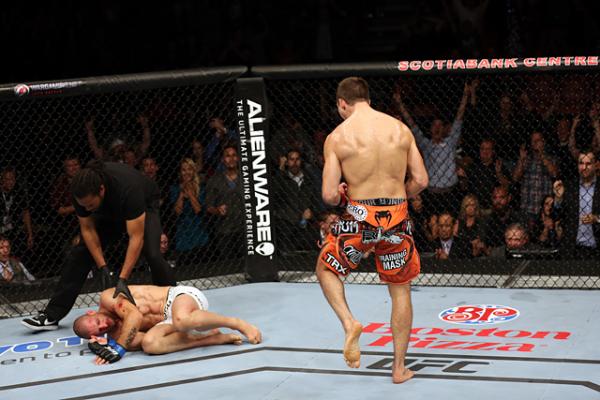 
Scotiabank Centre in Halifax, Nova Scotia was home to UFC Fight Night “MacDonald vs. Saffiedine” on Saturday night. A card that saw Rory MacDonald earn his first stoppage victory since 2012.

After two competitive rounds, MacDonald (18-2, 9-2 UFC) caught Tarec Saffiedine (15-4, 1-1 UFC) with a shot in the third round that dropped the former Strikeforce champion to the canvas. “Ares,” in his first five-round bout, followed quickly, rocking “Sponge” with right hands until referee Herb Dean stopped the action.

Saffiedine was throwing his patented leg kicks early and often, but the Team Quest product fell victim to a fluid left uppercut that was ultimately set up by MacDonald utilizing his combination punching to maintain forward pressure.

After the fight, the Tristar Gym member made it clear what he wants next.

“I’m next for that title, I want that title shot,” MacDonald said.

Now all eyes turn to UFC 181, where Johny Hendricks and Robbie Lawler will fight again to determine the promotion’s welterweight champion.

The co-main event featured Assuncao showcasing his striking dominance, picking apart of the face of his opponent. Caraway did land uppercuts at moments throughout the tilt and did score two takedowns, but the judges unanimously saw the fight (30-27, 30-27, 30-27) for the Brazilian.

After the fight, Assuncao made it clear that he wants what was promised to him, a fight for the bantamweight title. “Kid Lightning” didn’t lose much in defeat, showing he is more than able to hang with the elite in the division, but in the end, he couldn’t hang with Assuncao on the feet and his face wore it.

Both men have World Extreme Cagefighting lineage, but for now the similarities end there, as the Ascension MMA product will most likely await the winner of Dominick Cruz and T.J. Dillashaw in 2015.

Laprise, in his first fight back at 155 pounds since winning “The Ultimate Fighter: Nations” at welterweight, dominated the bout with his wrestling, maintaining dominant position against Cedeno for 7:29 of the 15 allotted minutes. “The Pink Panther” tried to stop the fight in the final round by throwing wild punches, but “The Disciple” closed the scrap just as he started it, with a takedown.

Laprise remains undefeated in his career, while Cedeno, a product of the Blackzillians in Florida, now has a losing record with the Zuffa-owned promotion following a first round win over Jerrod Sanders in July.

With the win, Theodorou reached the milestone of 10 victories, two coming under the UFC banner. “Carioca” was once again involved in another decision ending, with 14 of the 16 fights he’s been involved in reaching the judges’ scorecards.

Aside from razor-thin first and third rounds, the former Legend Fighting Championship welterweight champion seemed to clearly win the second, taking Taleb down multiple times as the frame came to a close. Taleb’s wrestling seemed to be the difference though, as the Tristar Gym member owned top control for 2:34 of the fight. The third round featured a late takedown for Taleb followed by some ground and pound to likely seal the win.Taleb, a former Bellator MMA fighter has now won two straight fights, with his last defeat coming against Marius Zaromskis at Bellator 74.

Gagnon took the fight to “El Gallito” -- who accepted the bout on short notice following an injury to Rob Font -- taking the back of his opponent and not relinquishing until the Scottsdale, Ariz., native tapped.

“It’s one of those things; it’s the fight game. Injuries happen and you just have to adapt,” Gagnon said after the bout. “I didn’t really look at a lot of video on him. I was just going to put the pressure on and make him pay for his mistakes.”

Gagnon has now pushed his current winning streak to four-fights since dropping his UFC debut and has finished 11 of his 12 wins via submission.

Cruickshank was able to successfully integrate wrestling with his always-creative striking game, resulting in career high six takedowns. As has plagued “The Assassin” throughout his UFC career, Njokuani lacked the output needed to defeat a fighter as active as “The Detroit Superstar.”

The 29-year-old Cruickshank, who was coming off a unanimous decision loss to Jorge Masvidal at UFC on Fox 12, has now won three fights in 2014. On the flipside, Njokuani, a World Extreme Cagefighting veteran, had alternated between wins and losses in his last nine fights -- but now has dropped two in a row.

Olivier Aubin-Mercier (5-1, 1-1 UFC) showcased his top-notch judo technique in a second-round submission victory against Jake Lindsey (9-2, 0-2 UFC). Mercier picked up his first win under the UFC banner, while Lindsey has now dropped two straight since being brought into the fray.

Mercier, a “The Ultimate Fighter: Nations” cast member took the fight to “The Librarian,” using a well-balanced technical attack to wear down his foe before ultimately sinking in the inverted triangle/kimura for the win. En route to the submission, Mercier seemed more than capable of finishing the fight on the feet, nearly catching Lindsey with multiple head kicks.

The loss snapped a five-fight winning streak for the Canadian, who spent most of the tilt looking for takedowns. “The Irish Dragon” was able to do more damage with his striking and nullified grappling attempts in the process, but overcame adversity at the end of the third period. Felder hung on for dear life as time expired, when Saggo nearly finished the fight with an armbar.

Felder, a Renzo Gracie Team member, retained his unblemished mark as a professional.


Chalk it up to a hometown advantage.

Fighting on just five-days notice, the Bellator MMA veteran rebounded from a one-sided opening round with two strong frames to hand “The Hooligan” his first loss as a professional.

The debuting Canadian, who had up until Saturday fought exclusively for Battlefield Fight League, was unable to utilize his sizeable reach advantage as “Einstein” caught his opponent twice up high before referee Dan Miragliotta was forced to intervene.

Munhoz slapped on the submission following a beautiful sprawl of the former Bellator MMA and World Series of Fighting competitor’s takedown attempt and did not let go, enduring a stiff slam to the canvas in the process.