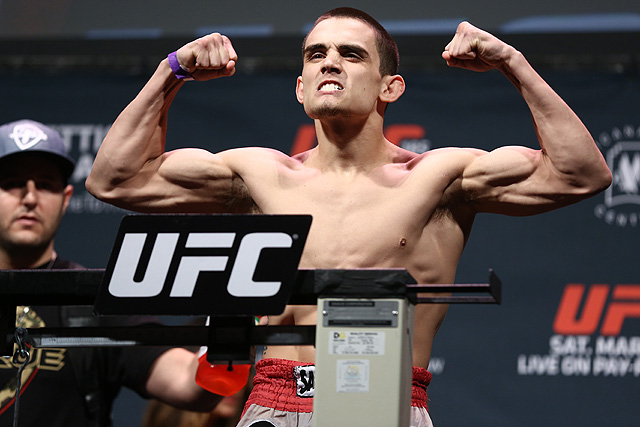 
Ryan Benoit, the second biggest underdog at UFC 185, tarnished what could have been a huge night for the Pettis brothers.

In the featured bout on UFC Fight Pass, Benoit bounced back from a tough opening round to finish Sergio Pettis with a perfectly placed left hook to the chin. After the shot, “Babyface” pounced, pouring it on en route to earning the technical knockout victory 1:34 into the frame.

Related » Benoit: My Kick After the Finish is Bad for the Sport


“Sergio was really rocking me in the first round, he had me rocking and rolling. I was trying to listen to my corner and in between rounds they were telling me to move forward,” Benoit said in a post-fight interview. “In the second I just kept coming forward and coming forward. The left hook is my bread and butter and that’s what I caught him with. I’m a finisher; I have been all of my career.”

Punches obviously weren’t enough though, as Benoit added a proverbial exclamation point to the ending by kicking the rear end of the downed Pettis. When questioned by UFC commentator Joe Rogan about his antics in a post-fight interview, the Dallas native admitted he was in the wrong.


Not gonna lie, this is funny pic.twitter.com/K8ySlXbRKm

"I gotta say I'm sorry real quick. I haven't fought in 16 months. The only thing I can say is I got really into the fight, really hyped, and I know I was way behind in the fight,” Benoit said. “I just knocked out Sergio Pettis in my hometown. I know it was wrong. I got zoned in -- I had my tunnel vision on. All I can say is I'm sorry."

Benoit now has his first victory inside the Octagon. The former Legacy Fighting Championship competitor dropped his debut against Josh Sampo via rear-naked choke submission at “The Ultimate Fighter 18” finale.

Meanwhile, Pettis’ record in the UFC drops to 3-2.