TOKYO -- Takenori Sato wrested the title of welterweight “King of Pancrase” from Kengo Ura in the main event of Pancrase “Impressive Tour 1” at Differ Ariake on Sunday, albeit by way of a contentious technical submission.

Sato put himself in the driver’s seat early by avoiding Ura’s jabs and snatching a single-leg takedown. From top in half-guard, Sato landed hard punches to the body and head of the champ. The challenger passed to side control late in the opening period, locking up Ura’s left arm for a kimura attempt at the same time. Once Sato was able to clear a leg over Ura’s head, he had enough leverage to torque the arm behind the champ’s back. 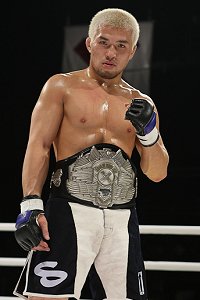 T. Irei
Sato is the sixth welterweight
King of Pancrase.
It was here where things got strange. Pancrase bouts utilize two additional referees outside of the ring to supplement the in-ring ref, and one such official apparently did not like what he saw with the Sato submission. A whistle of protest was blown, at which point in-ring referee Yoshifumi Oyabu reflexively waved off the bout. The official time was 4:40 of the opening round.

A disappointed Ura sat up and looked over to his stunned corner, waving his hand and shaking his head to indicate that he had not tapped. Ura and his corner left the ring quickly, rather than staying to protest the stoppage.

“This is a belt I was dreaming of for so long,” said a happy Sato, post-fight. “I could not have reached this point without the help of Kazushi Sakuraba and Hikaru Adachi. Of course, I must also thank my gym mates and supporters as well. All support is important.”

Both men fought for takedowns, but it was Ishikawa’s seemingly coincidental rope grabbing that saved him from being put on his back in the first frame.

Ishikawa took over in the second and third, getting his own takedowns to mash up Toryu’s head and body. Toryu reversed halfway through the third, but his inability to register significant offense cost him the bout on judges Kentaro Kawaguchi and Kenji Kosuge’s cards, both of whom scored it 30-29 Ishikawa. Only judge Tomoki Matsumiya ruled it a 29-29 draw. 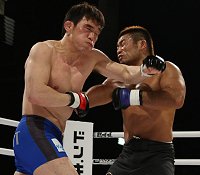 Despite dropping down a division, Yuki Kondo’s biggest problem wasn’t the weight cut, but rather the right hand of Hiroki Nagaoka. In Kondo’s welterweight debut-slash-test run, Nagaoka battered the former multi-divisional King of Pancrase from post to post with punishing punches, dropping the southpaw Kondo in the first stanza with a big right hook.

Kondo rallied in the final 30 seconds of the bout, but the previous nine minutes of having his head snapped back with punches was enough for judges Matsumiya, Kawaguchi, and Kosuge to award the decision to Nagaoka with scores of 20-18, 20-17 and 20-17, respectively.

Seiya Kawahara notched a questionable TKO win over Takumi Murata after a punch sent Murata falling through the ring ropes. Kawahara lunged to finish as a dazed Murata lay half outside the ring and half on the ring ramp. While the refs outside of the ring dove to keep Murata from spilling onto the concrete below, referee Matsumiya called the early TKO stop at 3:07 of the second frame. However, the over-excited Kawahara continued to punch for several seconds after the bell, for which he was not reprimanded.

“It’s been about a year since I’ve fought, because of my injury,” said a breathless Kawahara after the bout. “I was thinking about retiring, but since Ryo Kawamura took over as CEO of Pancrase, I want to make him proud.”

Kawahara-Murata was the evening’s third and final bantamweight title eliminator, alongside Masahiro Oishi-Masaya Takita and Tashiro Nishiuchi-Shoko Sato. Kawahara was blunt in his assessment of his fellow contenders for current king Manabu Inoue’s belt.

“The other two fights sucked, so I think I’ll get the title shot,” he said.

Elsewhere on the card, Tomonari Kanomata decisioned Tomoyuki Miyaji. Kanomata took Miyaji down with an outside trip in the opening seconds of their bout, and that’s where the fight stayed. Kanomata dominated positionally, mashing with short punches before taking Miyaji’s back to threaten with chokes in the second frame. For his bell-to-bell dominance, Kanomata was awarded 20-19 scores from judges Kawaguchi, Oyabu, and Umeki. 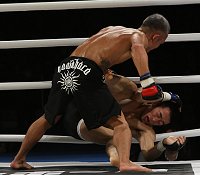 In typical fashion, Keiichiro Yamamiya danced along the outside and stung Kosei Kubota with jabs, low kicks, and overhand rights for two rounds, bloodying his opponent’s nose. The steady accumulation of strikes and an inability to connect frustrated Kubota, who, in the final minute, windmilled in an attempt to catch the elusive Yamamiya, whiffing at air and missing by wide margins.

In the fight of the night, Tashiro “Akai” Nishiuchi and Shoko Sato fought tooth-and-nail for two rounds, trading walloping punches and knees from the clinch in every corner of the ring. However, Akai pulled ahead of Sato in both the standup and the grappling realms, landing harder and more often, and controlling on top while on the ground. Judge Kawaguchi saw the bout a 20-20 draw, but judges Kosuge and Yoshinori Umeki sided with Nishiuchi, 20-19, for the majority decision.

Former Shooto 132-pound champion Masahiro Oishi captured Masaya “J-Taro” Takita’s back in both rounds of their fight. Despite controlling and threatening with punches and chokes in the first frame, however, Oishi was outboxed in the latter. Oishi’s control was enough to get the 20-19 nod on judge Kawaguchi’s card, but judges Kosuge and Umeki ruled the bout 20-20 for the majority draw.

Wrestling convert and “Dynamite” veteran Akihito Tanaka -- this time sans the “Kinniku Mantaro” mask -- wrestled his way to a unanimous decision win, stifling Yuhei Fukuda on the floor while taking side and back mount almost at will. Worryingly, Tanaka gassed during his dominating of Fukuda, which opened him up for knee-buckling punches in the second frame. Luckily, there was no mask to blind Tanaka as in his 2008 bout with Bob Sapp, allowing him to survive until the final bell and take the decision.

In what was essentially a kickboxing bout, karateka Yoshihiro Matsunaga out-landed SRC bantamweight tournament veteran Takuya Eizumi with stiff jabs and winging punches to take the unanimous decision on all three cards.

After spending the first round fending off a number of Hayato Sato’s leg lock attempts, Isao Hirose latched on a rear-naked choke for the tap at 1:43 of the second frame.

Starting the evening in exhilarating fashion, Kazuki Tokudome and Junichi Ota traded brain-rattling, knockdown flurries until Tokudome took mount to rain blistering punches. Referee Kawaguchi was prompted by a whistle-blowing Umeki at ringside to stop the fight at 2:55 of the first.