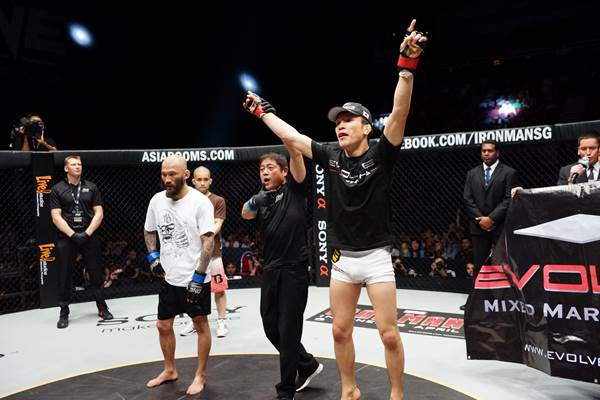 Kotetsu Boku’s reign atop the One Fighting Championship lightweight division did not last long. Shinya Aoki made sure of it.

Aoki (33-6, 2-0 OFC) submitted Boku with a second-round rear-naked choke, as he captured the 155-pound title in the One FC 8 “Kings and Champions” headliner on Friday at Singapore Indoor Stadium in Kallang, Singapore. Boku (20-8-2, tapped out 2:01 into round two, as he was submitted for the first time in nearly four years.

One of the sport’s fiercest ground fighters, Aoki had the champion in trouble from the start. Boku spent much of the first round on the mat, eating strikes and defending against his opponent’s vast arsenal of submissions. He survived Aoki’s initial onslaught but was not as fortunate in round two. There, Aoki secured a takedown from the clinch, transitioned to Boku’s back, locked in the choke and consolidated the hold by sinking his hooks. Boku fought to free himself, but surrender soon became his only option.

Larson (37-7, 1-0 OFC) struck for takedowns in the second and third rounds, neutralizing his foe’s lethal standup arsenal. The 35-year-old Minnesotan closed with a flourish, as he unleashed a barrage of elbows and punches that went unanswered in the final frame and left Manhoef (27-10-1, 1-1 OFC) beaten and bloodied.

The well-traveled Larson has compiled an 8-3 record since being released by the Ultimate Fighting Championship following his strike-induced submission loss to Brian Foster at UFC 106 in November 2009.

Meanwhile, former Shooto champion Masakatsu Ueda submitted Jens Pulver with a second-round brabo choke in the second of two bantamweight grand prix semifinals. Pulver (27-18-1, 1-2 OFC) -- the first lightweight titleholder in UFC history -- conceded defeat 3:52 into round two, as he lost for the 10th time in his last 15 outings.

Ueda (17-2-2, 2-0 OFC) countered a takedown with a reversal in the second round, postured inside Pulver’s guard and softened him with punches. From there, the Japanese veteran locked up the brabo choke and delivered his first submission in more than two years.

The 35-year-old Ueda will meet Kevin Belingon in the One FC bantamweight grand prix final after the Filipino prospect put away Thanh Vu with second-round punches in the other semifinal. Belingon (11-2, 2-2 OFC) finished it 60 seconds into round two.

“The Silencer” chopped down Vu (3-2, 1-1 OFC) with low kicks throughout a one-sided first round. In the second, Belingon clipped the Australian-based bantamweight with a head kick and followed-up with a volley of power punches that resulted in the stoppage.