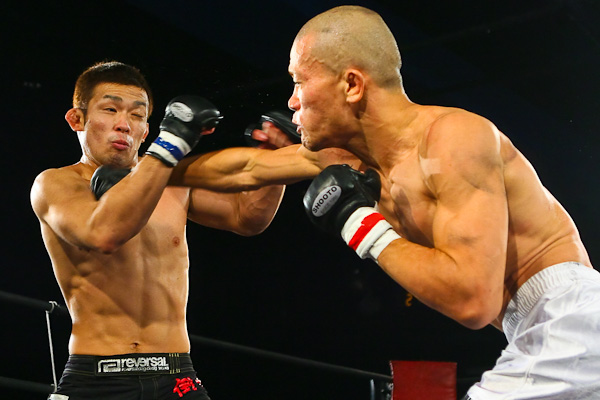 After months of inactivity, Shooto world champions Kuniyoshi Hironaka and Koetsu Okazaki will look to defend their titles for the first time next month.

Leading Shooto promoter Sustain this week announced that Okazaki will put his 132-pound belt on the line in a rematch with Hiromasa Ogikubo on May 18 at Tokyo’s Korakuen Hall. The same bill will feature Hironaka risking his 154-pound strap against an as-yet-unnamed opponent.

Ogikubo gave the current champ all he could handle in their first meeting, an October 2009 bout for the vacant 132-pound Pacific Rim title. After fending off multiple rear-naked chokes in the first round, however, Okazaki stormed back to punch out the Paraestra Matsudo product in the second. Since then, Ogikubo has gone 3-1 and risen to the No. 1 spot in the Japanese organization’s internal rankings, most recently outpointing veteran grappler Tetsu Suzuki in January. Okazaki also topped Suzuki before snatching the belt from one-and-done titlist Shuichiro Katsumura last April.

Hironaka has found success in his homeland at 154 pounds following an ill-fated run in the UFC welterweight division, where he compiled a 1-3 record before being cut in 2008. The former Cage Force lightweight champ reentered the Shooto ranks last April after a 5-year absence; three months later, he captured the title vacated by Willamy Freire with a unanimous decision over Shooto mainstay and Kid Yamamoto running mate Kotetsu Boku.