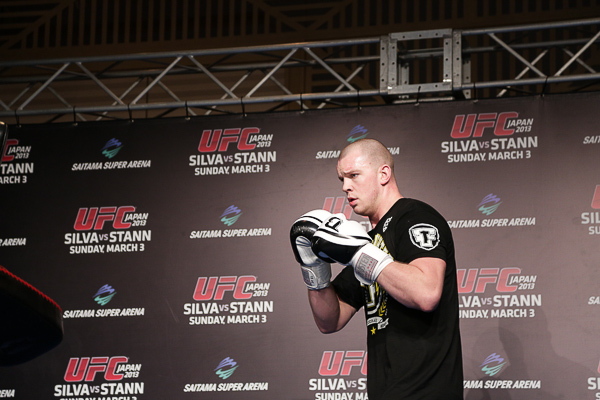 UFC heavyweight Stefan Struve has been sidelined indefinitely due to a heart condition.

Struve’s manager, Lex McMahon, released a statement on the development Tuesday night, revealing that “Skyscraper” was diagnosed with a leaking aortic valve and an enlarged heart. As a result, Struve was hospitalized for a week to undergo testing, the result of which informed doctors that Struve’s aortic valve has only two leaflets instead of three. Struve’s condition was initially reported on “UFC Tonight.”

“The aortic valve regulates blood flow from the heart into the aorta, the major blood vessel that brings blood to the body. In combination with the enlarged heart, it causes his heart to only pump 70 percent of the blood into the aorta and then the rest of his body, and the remaining 30 percent ends up back in the heart chamber,” McMahon wrote. “After consulting experts in both Holland and the United States, it was decided to treat the condition with medication for the next two months and assess the effectiveness of that treatment protocol. After those two months, the doctors will have an answer on what the best treatment options are.”

Though Struve’s recent diagnosis has halted his fighting career for the time being, the seven-foot Dutchman remains optimistic about a return to the Octagon.

“At the direction of his doctors, Stefan has now been released from the hospital and has resumed light cardiovascular exercise. Stefan fully appreciates the significance of the condition he has been diagnosed with,” McMahon wrote. “However, he is optimistic about the eventual outcome and fully plans on living a long, healthy, active, happy life and eventually returning to competition in the Octagon for his quest to become the UFC heavyweight champion.

“Stefan loves the UFC and plans on being involved with company as a fighter and ambassador for years to come. Stefan wants to thank all the fans who have supported him thus far in his career, as well as Dana White, Lorenzo Fertitta, Joe Silva, Dr. Jeff Davidson, the entire staff of the UFC and his fellow fighters for affording him the opportunity to compete on the biggest stage in the sport of MMA [and providing him with a] tremendous degree of support during this trying time.

“In particular, Stefan wants to thank Dana White, Lorenzo Fertita, & Joe Silva for immediately getting engaged with this issue and providing Stefan access to the best possible medical care. Stefan will be sharing his experiences as he deals with this medical condition in the hopes that he can serve as a role model by helping to create awareness and inspire others to fight through adversity."

Struve, 25, joined the UFC in 2009 and has competed 13 times for the Las Vegas-based promotion, posting an Octagon record of 9-4 over four years of competition. The lanky prospect most recently competed this past March, when he saw both a four-fight winning streak and his jaw broken by the hard-hitting Mark Hunt at UFC on Fuel TV 8.