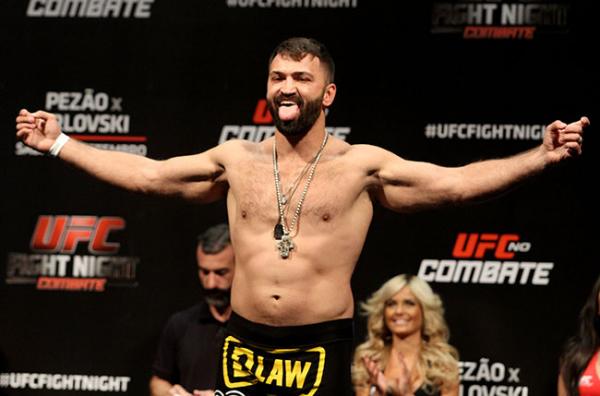 Andrei Arlovski will look to run his winning streak to five in May. | Photo: Gleidson Venga/Sherdog.com


A heavyweight bout pitting Travis Browne against Andrei Arlovski and a flyweight tilt featuring Joseph Benavidez versus John Moraga have been added to UFC 187 “Jones vs. Johnson.”

Ultimate Fighting Championship officials announced the fights on Wednesday. The pay-per-view card emanates from MGM Grand Garden Arena in Las Vegas on May 23 and features a main event of Jon Jones defending his 205-pound title against Anthony Johnson.

Browne, 32, bounced back from a loss to Fabricio Werdum by finishing Brendan Schaub at UFC 181. “Hapa” has only been defeated twice in 11 Octagon appearances.

Arlovski, 36, has been experiencing a career resurgence in his second stint with the Las Vegas-based promotion. After losing to Anthony Johnson at WSOF 2, “The Pit Bull” has rallied off four consecutive wins, including his first two back under the UFC banner.

With losses only to Dominick Cruz and Demetrious Johnson in 25 career fights, Benavidez will look to win his third straight fight when he meets Moraga. Most recently, the 30-year-old Team Alpha Male member defeated Dustin Ortiz at UFC Fight Night “Edgar vs. Swanson.”

Moraga has also been victorious in his last two outings, both via submission. The only losses on his record have come against the elite at 125 pounds, the incumbent champion “Mighty Mouse” and John Dodson.