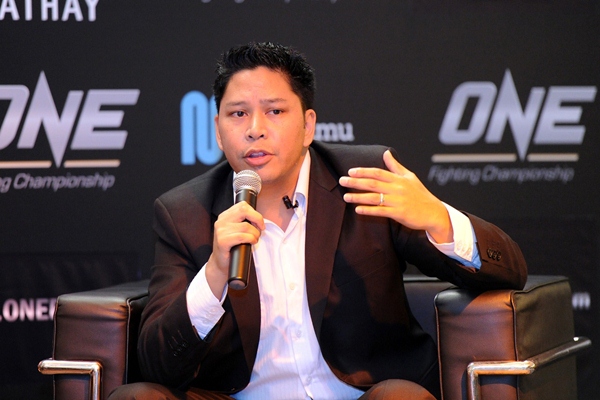 This Friday, One Fighting Championship will stage its eighth event, One FC 8 “Kings and Champions,” at Singapore Indoor Stadium. One FC CEO Victor Cui recently spoke with Sherdog.com about the organization’s first 18 months of existence, how he feels his company matches up with the UFC, and what’s coming up next.

Sherdog.com: Could you tell us about what’s coming up for One FC this year?
Victor Cui: Things are fantastic. Things are just moving so fast, I’m having problems keeping up with it. We’ve got new blue-chip sponsors coming on board. Our last event in February had Tune Talk, which is one of the largest telcos in Asia. We’ve launched an entire amateur series in Malaysia, with 12 events run by Tune Talk in partnership with One FC. It’s really promoting awareness and education at the amateur level, of the opportunities to grow the sport there. We have a huge partnership with Sony. We are sponsored by “Iron Man 3.” It’s just really big brands that are coming on-board with us right now, and that’s exciting, but it’s difficult to keep up because I’m traveling all over the place.

Luckily, we just hired a new senior vice-president and head of commercial partnerships named Kwong Wai Victor Chu. He’s probably, without a doubt, in all my years of experience here in Asia, one of the best guys when it comes to closing business deals in sports. He’s probably closed over $45 million worth of deals in the last couple of years with every major corporation you can think of. He’s one of the most sought-after guys in Asia for sports. His rolodex is unbelievable. He’s worked with IMG, ESPN, the NBA -- his pedigree is just fantastic. I’m really excited to have him on-board.

What’s happening is our television broadcast has just exploded around the world. We’re probably in over 70 countries live right now, for our April 5 show, and that’s growing. For the first time, we’ll be live in Asia on Star Sports to 20 new countries, and that’s 500 million potential viewers. You add global broadcasters and you’re looking at our April 5 being in front of over 600 million people. On a Friday night here in Asia, there is no other live sport on Star Sports across Asia other than One FC. It means everybody going out Friday night, every pub, every club you go to that’s showing sports on their television screen, the only thing they’re gonna see is One FC.

Sherdog.com: What other locations are you eying for events this year?
Cui: We’ve got 12 events scheduled for this year, and then 24 in 2014. That’s gonna take us to China, India, Taiwan, Hong Kong, Indonesia and Malaysia.

Sherdog.com: It’s been about 18 months since the first One FC show. What’s been unexpected or surprising to you in this first year and a half?
Cui: We’re definitely way ahead of where I thought we would be at this point. The biggest surprise to me is how quickly we’re selling out stadiums, and the new sponsors that have come on-board. Frankly, the level of sponsors we’ve got now, I wasn’t expecting that for at least another year. Even if you look at UFC, they don’t have a major telco. These are real big, blue-chip companies that have come on-board with us here and have come on very early. That’s great news for us, and I was surprised by it.

The other challenge is that we’ve started going to bigger and bigger venues. The last time we were in Manila, for example, we were in a 16,000-seat stadium. Now, we’re moving to a 20,000-seat stadium. The challenge has been in finding venues that are big enough for us now, because infrastructure is a little bit lagging in Asia, and there aren’t that many fantastic stadiums in every major city. A lot of the stadiums are 30, 40 years old, so those come with additional challenges.

Sherdog.com: You mentioned that you’re flying all over the place. Are you securing sponsorships, scouting talent -- what are you spending your time on these days?
Cui: Matt Hume looks after all of our fighter recruitment, matchmaking and talent, so he takes the lead on all of that. My travel has mostly been with sponsors and our new television partners. A year and a half ago, we closed a 10-year deal with ESPN Star Sports, so we were focused on that. But, when other broadcasters around the world started seeing the show that we were putting together, we started getting a lot of interest, and that’s why, in the span of half a year, we’ve got 70 countries around the world showing our content. I really wasn’t expecting to have our show in Brazil and France and Germany and Canada and Africa, all these other places, so quickly. It’s a good problem to have, but it means we need to hire a few more people to look after that side of the business.

Sherdog.com: You mentioned Matt Hume, your matchmaker and VP of operations. Can you talk about what he does for One FC?
Cui: Matt Hume is a rock star. He has an unbelievable reputation. He basically created MMA in Japan, with the rules and the officials. When he’s looking at a fighter, he’s looking at them from a perspective that nobody else can, because he can see diamonds in the rough. I believe his gym [AMC Pankration] is the oldest MMA gym in North America, and I believe he’s produced more champions than anybody else, whether you look at guys like Bibiano Fernandes to Demetrious Johnson. He knows what he’s doing and he’s very well-respected for that.

I think you’ve seen a significant increase in the quality of our matchmaking and the level of fights, and that’s because of what he’s done. He calls a gym owner and talks to them, and there’s immediately a level of trust and understanding, because the gym owner knows they’re working with one of the most respected guys in the sport. There’s nobody that has anything bad to say about Matt Hume, as a coach, as an official, as a champion of growing the sport of MMA. So, he’s been fantastic, and he’s a really important part of the company.

Sherdog.com: What’s been the biggest change in One FC since its inception?
Cui: The biggest change, I would say, that has emerged in the last year and a half is what I really feel is the emergence of a global duopoly of East versus West. You’ve got UFC in the West, One FC as the biggest in the East. You see the storyline of East versus West play out in almost every industry you can think of, from Apple versus Samsung, YouTube versus Youku, Twitter versus Weibo, Facebook versus Renren. If you compare, UFC has got a 90-percent market share in the states; we’ve got a 90-percent market share in Asia. UFC is 90-percent Caucasian, 10-percent non-Caucasian; we’re 90-percent Asian, 10-percent non-Asian. We’re filling the biggest stadiums. We’ve got the biggest gates, biggest attendance. We have a television reach of over 600 million viewers. We’ve got fantastic blue-chip sponsors on board, and UFC has the best sponsors on board.