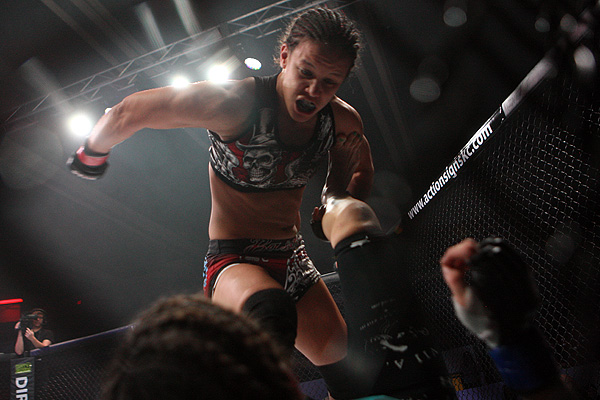 Since “The Ultimate Fighter” debuted in 2005, the UFC has gone to great lengths to keep its groundbreaking reality series fresh. The latest step, of course, is to allow women to enter the fray.

On Thursday, the UFC released the 32-member, coed cast for Season 18 of “The Ultimate Fighter,” which premieres on Sept. 4 on Fox Sports 1 at 10 p.m. ET. The “TUF” house will be comprised of 32 bantamweights – 16 male and 16 female – and coached by bitter rivals Ronda Rousey and Miesha Tate.

The women’s cast features a number of tenured veterans, including Shayna Baszler [pictured], Tara LaRosa, and Roxanne Modafferi, to name a few. That trio alone has combined for 72 professional fights. Meanwhile, 16-fight veteran and one-time Bellator competitor Cody Bollinger highlights a male cast that has just 12 total losses among its 16 hopefuls.

The show’s two-hour premiere will include 16 elimination fights to narrow the cast down to the eight men and eight women who will enter the “TUF” house, with the respective winners ultimately earning a six-figure contract with the UFC. Rousey will defend her 135-pound title against Tate in the co-headliner of UFC 168, while the “TUF 18” finale is set to take place on Nov. 30 in Las Vegas.

This season of The Ultimate Fighter was monumental, as we had women as coaches and competitors – fighting and living together with the men – for the first time ever,” UFC president Dana White said in a release. “Obviously the fierce rivalry between Ronda and Miesha is going to get everyone’s attention, but it doesn’t take away from their dedication and success as coaches and the level of talent this season.”