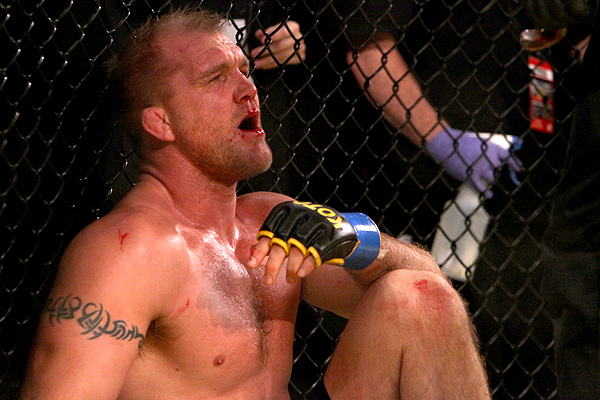 HIGHLAND, Calif. -- Despite scintillating knockouts, upsets and not a single bout that saw the final bell, King of the Cage’s live television debut on MavTV ended with a whimper, leaving the masses at the San Manuel Indian Bingo and Casino -- and likely home audiences -- craving more.

Lopez succeeded early on as he blitzed an unprepared Prangley in the opening seconds, landing knees and punches before being brought to the mat. While the offense was arguably enough to give him the opening frame, Lopez was afterwards repeatedly grounded and stifled by Prangley, who slowly but surely advanced position on the mat and landed an increasing number of blows on the feet.

The fourth round looked to be a turning point as a clearly fatigued Prangley could no longer defend Lopez’s strikes and found himself trapped precariously against the cage. Lopez scored with several blows before returning to his feet and throwing an ill-advised knee to Prangley’s head, catching the South African near his left eye and causing referee John McCarthy to halt the action. Almost immediately it appeared as though Prangley would be unable to continue, complaining of a lack of vision from his damaged eye, and the bout was called shortly afterward.

Scoring the truncated fourth round along with the previous three, judges Ron McCarthy and Michael Bell turned in scores of 39-37 for Prangley, while judge Cecil Peoples dissented with an even 38-38 scorecard, giving Prangley a technical majority decision and the title. The result pleased few in attendance: not either fighter, their respective camps or the fans shouting for a rematch.

David Gomez started strong in defending his 170-pound title, repeatedly finding the chin of challenger Sam Liera in the opening frame of their match, but it wasn’t to be for Rancho Cucamonga, Calif., native. 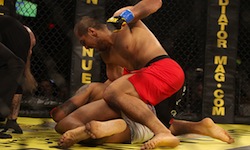 Dave Mandel
Liera seized Gomez’ welterweight title.
For his part, Liera looked to dig to Gomez’ body early and often, but had few answers for an effective Gomez left hook counter. On their feet in the first round’s closing moments, an innocuous right hand behind the ear ruined Gomez’s equilibrium and put the Shark Tank fighter into retreat. Liera followed up with several more punches, dropping Gomez to the mat and raining down blows as Gomez’s defenses collapsed. Referee Mike Beltran had little choice but to rescue Gomez from further punishment, giving Liera the title and win at 4:42 of the first round. Liera’s fourth straight win snapped Gomez’s own five-fight win streak.

Looking to finally capitalize on his third shot at King of the Cage gold, local favorite Marvin Garcia finally lived up the expectations of the heavily partisan crowd, as he choked out WEC veteran Justin Robbins to take the vacant KOTC 135-pound title.

Garcia utilized his usual hyper-aggressive style to wear Robbins down, who managed to gain temporary top position, but little else on Garcia in the opening frame. A wild exchange to open the second round saw Robbins shoot in on the implacable Garcia, who countered the ineffective takedown with a powerful guillotine choke, augmented by the “Riverside Warrior’s” sparkplug-like frame. Robbins appeared to be unconscious for several seconds before referee John McCarthy intervened, giving Garcia the technical submission victory at 48 seconds of round two.

For the first time in recent memory, undefeated prospect Johnny Cisneros battled for the Highland crowd’s affections against Upland, Calif.’s Joshua Aveles, as dueling chants of “Johnny” and “Joshua” filled the arena. Ultimately, the verbal battle between the fans would last longer than the bout itself, as a single laser-guided right hand from Aveles dropped Cisneros in a heap, and three more right hands on the prone “Tattooed Terror” sealed the deal just nine seconds into the bout. Aveles, now 10-8, has won eight of his last nine bouts.

In post-main event action at 145 pounds, Millenia MMA’s Roberto Vargas overcame a difficult first round against Musa Toliver, quickly grounding the Bodyshop Fitness rep and grabbing a standing guillotine choke in the ensuing scramble, forcing Tolliver to submit at 1:09 of round two.

In the night’s final match, Frank Park made quick work of the winless Ken Tonorio, stopping his undersized foe with strikes from the mount at 1:23 of the first round.