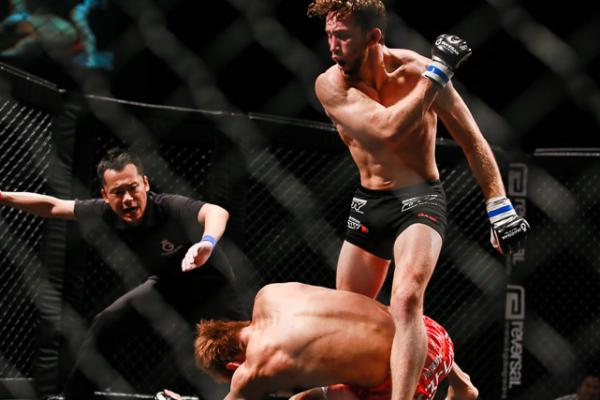 
If Victor Henry was brought to Japan to become a “W” on someone else’s record, nobody told the Californian.

Henry gunned down local Japanese favorite and 60-fight veteran Hideo Tokoro on Sunday in the bantamweight main event of Grandslam MMA “Way of the Cage.” Entering the fight at Differ Ariake arena in Tokyo, Henry had just seven professional bouts on his ledger.

Cornered by UFC heavyweight Josh Barnett, Henry looked to have the edge on Tokoro in strength and speed as he rebuffed takedown attempts and scored with straight right hands. Early in round two, a right cross sent Tokoro to the canvas, where he struggled to survive on his knees. Henry jumped on his wounded opponent’s back, flattened him out and unloaded with a dozen or more big punches until the fight was halted at 1:52 of the second stanza.

By way of celebration, Henry donned a pair of zebra-striped Zubaz pants and took a spin on the purpose-built stripper pole attached to the outside of the cage. The CSW fighter’s record now stands at 7-1 with five finishes, while Tokoro falls to 32-27-2.

Former UFC bantamweight Nam Phan saw his first action since parting ways with Zuffa in March, taking on longtime Zst staple Kenichi Ito in a 141-pound tilt. Ito started the fight bombing at Phan with overhand rights but was soon forced to move backward as Phan found his range. After thumping Ito with a series of body shots, Phan countered a low kick with a well-timed right hook that put Ito on the ground. The finish was academic from there, as Phan pounded out the turtling Ito for a TKO victory at 4:27 of round one.

Shunichi Shimizu’s first appearance since his one-fight UFC stint was a largely forgettable matchup with Shooto flyweight Yosuke Saruta, a.k.a. “Tobizaru No. 2.” Shimizu was taken down after botching an early shot and never seemed to find proper footing against the diminutive “Flying Monkey” over the ensuing rounds. Saruta kept busy with leg kicks and short bursts of offense throughout, earning him a unanimous decision with scores of 30-27, 29-28 and 29-28. Combined with a January defeat to Kyung Ho Kang, Shimizu has now suffered the first back-to-back losses of his 48-fight career.

It was a literal no-win situation for Koji Mori, who came in overweight for his 155-pound bout with Fumiya Sasaki and thus would have had any potential victory overturned to a no contest. Mori appeared to be on his way to just that outcome after sprawling on an early takedown attempt and lumping up Sasaki’s left eye with jackhammer left hands. After surviving a consult with the cageside physician, however, “Kuwai D” stormed back to drop Mori with a spinning elbow and then rendered him unconscious with a rear-naked choke at the 2:25 mark.

New Zealand middleweight Bob Armstrong made short work of MMA neophyte Yosuke, assaulting the mononymous kickboxer with heavy hands and knees from the opening bell. An overhand right put Yosuke on the ground at the base of the fence, and a few follow-up punches from Armstrong brought on the referee stoppage after 31 seconds.

Daisuke Hoshino staved off nonstop submission attempts from Kota Okazawa and put in enough work on top to earn a unanimous decision. The Tsudanuma Dojo lightweight nearly finished Okazawa with a first-round brabo choke and did damage in the second frame with rough elbow strikes from top position. All three judges saw the bout 30-27 in Hoshino’s favor.

Muscly and aggressive Taku Kajikawa got in the face of Setsu Iguchi before their flyweight fight and then remained there for the better part of three rounds. Iguchi, who had not competed since 2007, was overwhelmed by the pace and takedowns of the younger man, and the judges rendered their first decision of the evening with unanimous 30-27s for Kajikawa.

Bantamweights Go Kashiwazaki and Takahiro Furumagi went sweep-for-sweep in an evenly matched opening round that saw both men score takedowns and top control. Kashiwazaki took the driver’s seat in round two, roughing up Furumagi with ground-and-pound before securing a rear-naked choke at 2:02.

The show’s early prelims produced a bevy of first-round knockouts. Welterweight Yuji Fukawa turned out Masahiro Mizushima’s lights with punches after 2:05, while featherweight Daiki Kaneko felled Hiroki Mihara with a lovely counter right at 4:29. At bantamweight, Satoshi Fujiwara blasted Shinya Sugimura with a knee and punches at the 3:53 mark, and Takuya Hirano stopped Kohei Maruyama with a one-punch KO after 45 seconds. The fighter known only as “Morishiman” kneed Masaki Sakurazawa into oblivion at 1:57 of their 161-pound catch-weight affair.

Tetsuo Nakanishi knocked out Takayuki Komazawa in terrifying fashion just 95 seconds into their flyweight bout. With Komazawa working for a triangle from his back, Nakanishi lifted the AACC fighter in the air and slammed his head off the canvas. Komazawa went limp instantly, remained unconscious for several minutes and was eventually stretchered from the cage.

There was no shortage of submissions on the undercard, either. Flyweight Yuichi Miyagi latched on to Tokuaki Ninomiya’s back and stayed attached when Ninomiya stood to finish with a rear-naked choke at 4:03 of round two. Flyweight Kenta Nagatsuka made good on his “Hachioji of the Dead” moniker with a zombie-themed entrance, then engaged in a leglock battle with Keisuke Tamaru before tapping him with an omoplata at 4:32 of round one. Featherweight Kotaku Kawazu opened the professional portion of the card with a 4:08 guillotine-choking of Akira Omura.