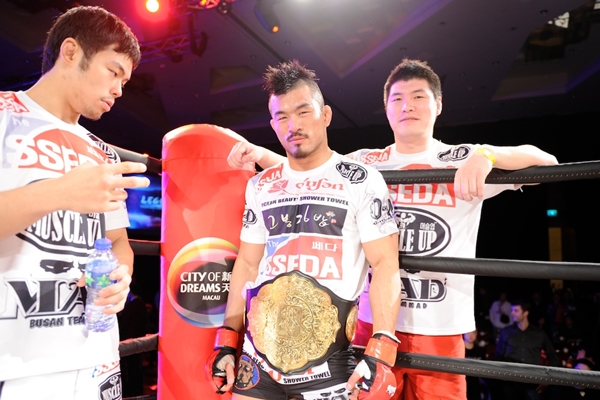 
Legend Fighting Championship welterweight titleholder Myung Ho Bae lobbed verbal bombs at challenger Jingliang Li in online videos prior to their headlining bout at Saturday’s Legend 7 in Macau, referring to the Chinese fighter as a “Neanderthal,” among other things. Once in the ring, Bae had to back up his words, as Li used brute strength and wrestling to take the South Korean “Wolverine” the distance.

Sporting a heavily taped right knee, Bae spent the better part of the first round fending off takedowns in the clinch. When Li finally got the champ down late in the period, he was unable to hold him there for long. The tepid clinch work continued until midway through the second round, when Bae hit a takedown and moved into full mount. The Wolverine held the position until late in the round, managing some ground-and-pound despite Li’s attempts to control his posture. 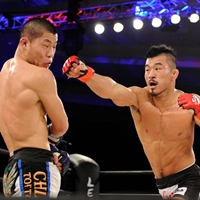 K. Lim
Bae decked Li.
Bae switched between orthodox and southpaw stance to string together a few punches early in round three, but Li came on strong with a takedown and heavy offense. After slowing the pace with an omoplata, Bae escaped to his feet, then worked to secure Li’s back after the next takedown, finishing the fight hunting for a triangle choke. The judges were unanimous in their decision for Bae, but split in their scores: Daniel Pereira ruled it a close 29-28, while Scott Morley had it 30-28 and Jordan Morley 30-27.

“Because I’m a handsome, cool and sexy guy, I knew I would win this fight,” Bae said after the bout, “but at the same time, my opponent, Li Jingliang, is a tough opponent. Because of him and because of this great promotion, I could make an exciting fight.”

Tuerxun Jumabieke wrestled both the Legend bantamweight strap and the mantle of China’s top 135-pounder and from defending champ Honggang Yao in their 15-minute affair.

Despite his background in traditional Chinese wrestling, it was Yao who was eager to trade strikes on the feet early on, until Jumabieke snared the champ in a deep guillotine choke which allowed him to control the latter part of the first frame. In the second, Jumabieke denied single-leg shots from the slowing China Top Team product while scoring a trio of takedowns to secure the round for himself.

The champ looked to turn the tables with a guillotine in the opening minute of the final round, but Jumabieke escaped and took the driver’s seat in the middle part of the frame with more ground work. Despite another go-for-broke choke attempt in the last minute, the visibly exhausted Yao finished the bout on his back, while the challenger showed off with some post-fight pushups.

Judge Erick Buthsombat saw fit to award Yao a 29-28 scorecard; judges Jordan and Scott Morley sided with Jumabieke by a narrow 30-29 margin. With the split decision win, Jumabieke improved his unofficial MMA record to a sterling 22-0-1. 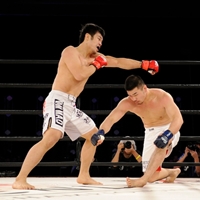 K. Lim
Yang melted Tatsumi.
Making his second appearance at 185 pounds, onetime heavyweight prospect Hae Jun Yang stuck to his usual stand-and-bang game plan against Hideto Tatsumi. The “Korean Fedor” went headhunting in the style of his Russian namesake, eventually finding Tatsumi’s jaw with an overhand right which buckled the Japanese fighter’s legs and forced referee Warren Wang into action at 3:35 of round one.

China Top Team representative Wang Sai took a few minutes to establish his ground game against Gareth Ealey, but once he did, he stayed aggressive and busted up Ealey with savage ground-and-pound. With the New Zealander bleeding profusely from his nose and face, referee Thomas Fan waved the fight off between the second and third rounds.

Late replacement Ev Ting nearly shocked unbeaten Mark Striegl with an armbar midway through the opening round of their bantamweight bout, but the upset was not to be. Striegl twisted loose and attached himself to the Kiwi’s back, where he sunk in a rear-naked choke that put Ting to sleep at 3:51 of the first. 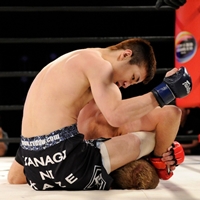 K. Lim
Nakahara got himself DQ'd.
Michael Mortimer of Australia got his second win in the Legend ring, though not the way he wanted. Mortimer appeared to twist his ankle late in the first round of his bantamweight tilt against Taiyo Nakahara, and the Japanese fighter attempted to capitalize with frenzied ground-and-pound. Referee Wang verbally warned Nakahara in English for striking the back of Mortimer’s head, but Nakahara did not acknowledge the official, leading Wang to award Mortimer the win via disqualification at 4:24 of round one.

Australians Matt Cain and Damien Brown looked to have the edge in their respective bouts until their opponents capitalized on mistakes. Cain was unable to put away Chinese middleweight Wenbo Liu with a deep rear-naked choke, leaving room for Liu to reverse the position and secure a tap with one of his own at 4:37 of round one. Brown was getting the better of Wajutsu Keishukai lightweight Koji Ando on the feet before a sloppy shot allowed Ando to lock up a reverse triangle choke at the 2:27 mark.

Former sanda striker Xian Ji put his ground skills to use against featherweight Leonard Delarmino of the Philippines. Ji threw up guillotine, armbar and triangle attempts before eliciting a tap with a rear-naked choke at 4:52 of the first.

Takasuke Kume solidified his reputation as a lightweight to watch Sunday in Nagoya, Japan, with a second-round rear-naked-choking of UFC vet Shane Nelson at Shooto “Gig Central 24.” The 26-year-old Hatsu Hioki training partner has submitted five consecutive opponents and is now 2-0 at 155 pounds. In the co-main event, Shooto’s 2011 rookie champion at 115 pounds, Jun “Requiem” Nakamura, recorded his fourth armbar win by tapping Kenichi Sawada at 2:30 of round two.

Rafael “Morcego” Silva had just one loss in his last 14 fights heading into Saturday, and he got that loss back in the main event of Nitrix Champion Fight 10 in Camboriu, Santa Catarina, Brazil. Before a hometown crowd, the “Bat” used ground-and-pound to take the Nitrix bantamweight title away from Diego D’Avila -- who won the pair’s February 2011 encounter via armbar -- at 3:52 of the opening round. Brothers Mike Jackson and Ken Jackson of American Top Team OKC split results on the undercard; Ken submitted to an armbar from Juliano “Ninja” Wandalen while Mike choked Geovani “Max” de Lima unconscious with a dramatic, come-from-behind guillotine.

Five months after a loss to David Hulett cost him a spot in Bellator’s upcoming welterweight tournament, Ryan Ford bounced back in the main event of Saturday’s Aggression MMA 9 in Edmonton, Alberta. “The Real Deal” used ground elbows to secure a first-round stoppage against late replacement Ricky Goodall, who stepped in for the injured Tyson Steele on less than a week’s notice. Ford, who improves to 17-4 with 16 finishes, last week told Edmonton’s The Team 1260 that he expects to debut for Bellator in May.

While he didn’t use his trademark “Rolling Thunder” somersault kick, 36-year-old kickboxer Peter Graham did keep his surprising MMA resurgence rolling Saturday with a win over fellow striker Konstantin Gluhov at the 2012 Governor’s Cup in Khabarovsk, Russia. The Australian evaded an early leglock attempt and stayed vertical long enough to destroy Gluhov with a perfectly timed right hook that put the Latvian heavyweight to sleep at 2:47 of round one.

Finally, Saturday in Omsk, Russia, “The Tiger” took out “The Liger.” Hot lightweight prospect Alexander Sarnavskiy scored one for non-cryptozoological creatures and pushed his perfect record to 18-0 with a first-round triangle-choke submission of “The Ultimate Fighter 13” cast member Len Bentley at the Saturn Combat Sports Festival.