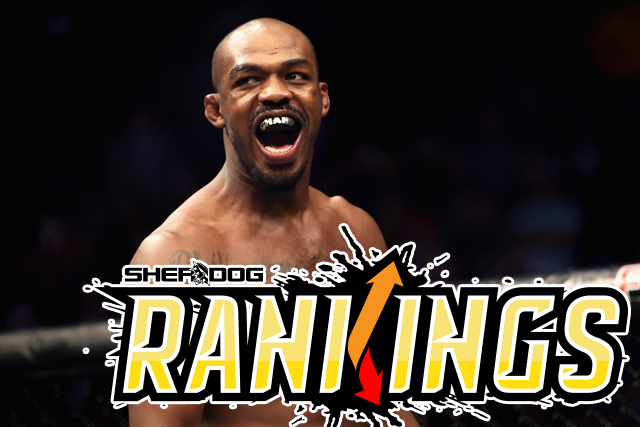 While out-of-the Octagon transgressions and failed drug tests have consistently derailed him in recent years, Jon Jones remains without peer when the cage door shuts. “Bones” proved that once again at UFC 232, when he defeated Alexander Gustafsson via third-round technical knockout in the evening’s headliner at The Forum in Los Angeles, California. After a narrow victory over the Gustafsson some five years prior, Jones close the book on their rivalry in emphatic fashion with a volley of punches from back mount to claim the vacant light heavyweight crown. As a result, the Jackson-Wink MMA product re-enters our 205-pound rankings at No. 1.

Meanwhile, Amanda Nunes now holds the top spot in two divisions following a stunning 51-second knockout of Cristiane Justino in the UFC 232 co-main event. In victory, “Lioness” became just the third simultaneous two-division champion in the history of the Las Vegas-based promotion. She also dispelled the unbeatable mystique “Cyborg” had acquired during a string of devastating knockout victories over the years.

Elsewhere, Kyoji Horiguchi became Rizin’s inaugural bantamweight champion thanks to his third-round submission of Darrion Caldwell on New Year’s Eve, a win which allowed him to leapfrog “The Wolf” in our 135-pound poll. Meanwhile, top-ranked atomweight Ayaka Hamasaki maintained the status quo at 105 pounds with a submission of No. 3 Kanna Asakura in another featured bout at Rizin 14.