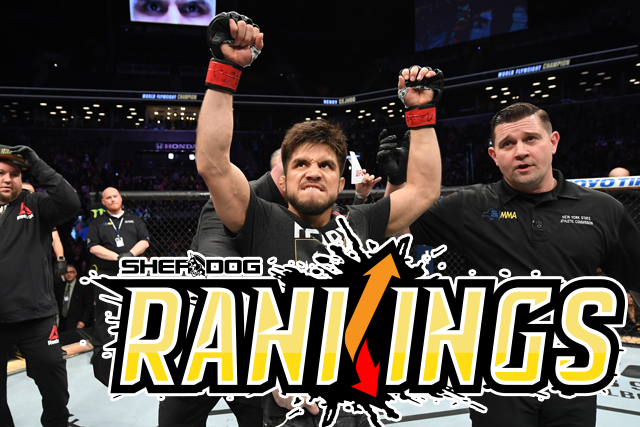 If the Ultimate Fighting Championship did indeed send T.J. Dillashaw to kill the flyweight division, as he so claimed, then Henry Cejudo is doing his damnedest to keep it afloat.

Cejudo defended his 125-pound belt in emphatic fashion at UFC Fight Night 143 in Brooklyn, N.Y., ushering in the ESPN era with a 32-second technical knockout of Dillashaw in a champion vs. champion showdown. While Dillashaw has protested the stoppage to the point of being a sore loser, there’s no denying that Cejudo was impressive in their abbreviated bout. As a result, Cejudo maintains a firm hold atop the flyweight rankings, and Dillashaw is still No. 1 at bantamweight — but unranked at 125 pounds.

Meanwhile, it was an inauspicious Octagon debut for former KSW flyweight champion Ariane Lipski, as she dropped a convincing decision to Joanne Calderwood at the Barclays Center. The loss is costly: “The Violence” queen tumbles from No. 4 to the bubble list in the women’s 125-pound division, while “JoJo” enters the poll in the 10th spot.

Elsewhere, a dominant victory for Gregor Gillespie keeps him at No. 10 in the crowded lightweight rankings, while former Top 10 staple Donald Cerrone joins the 155-pound bubble list following an enthralling stoppage of prospect Alexander Hernandez. Finally, Joseph Benavidez and Dustin Ortiz fought tooth-and-nail in their rematch, with Benavidez edging out a narrow decision. Both fighters stand pat at flyweight— Benavidez at No. 4 and Ortiz at No. 10.