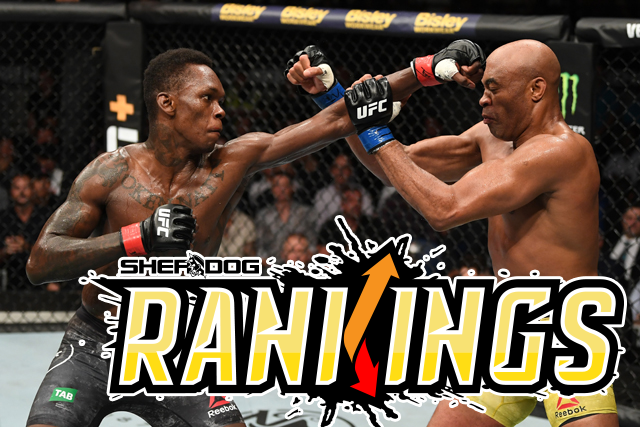 Thrust into a headlining role on short notice, Israel Adesanya made the most of his opportunity at UFC 234.

In a bout that was more competitive than many expected, “The Last Stylebender” outpointed middleweight legend Anderson Silva at Rod Laver Arena in Melbourne, Australia. The Nigerian-born Kiwi displayed his usual flair for showmanship while still winning the majority of his striking exchanges with “The Spider” to earn his fifth consecutive Octagon triumph at 185 pounds and run his overall record to an impressive 16-0. As a result of the still-growing résumé, he jumps to No. 7 in our latest middleweight rankings.

Adesanya’s ascent to title contention may have to wait, however. UFC 234 lost its original main event when reigning champion Robert Whittaker withdrew from the card on the day of his title fight with Kelvin Gastelum to undergo emergency hernia surgery. Whittaker, who has won nine straight fights, maintains his No. 1 ranking, but the rest of the division will remain in limbo until a clear timetable for his recovery is established.