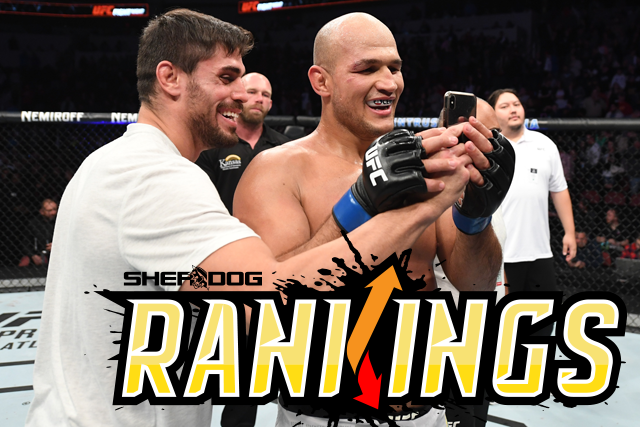 Junior dos Santos may never be the fighter he was at his championship peak some eight years ago, but he is proving that his current version can still be pretty damn good.

“Cigano” notched his third consecutive triumph in the UFC Fight Night 146 headliner, defeating Derrick Lewis via technical knockout 1:58 into the second round of their heavyweight bout in Wichita, Kansas. After a 3-3 stretch from 2012 to 2017 that included a pair of career-altering fights with Cain Velasquez, the 35-year-old Brazilian has looked impressive in dispatching Blagoy Ivanov, Tai Tuivasa and Lewis in succession. His victory over the most recent title challenger puts the ex-champ back in the contender discussion, but for now, dos Santos will move up in our heavyweight rankings from No. 8 to No. 3. Meanwhile, Lewis slips to fifth behind Francis Ngannou, who rises on the strength of recent dominant wins over Curtis Blaydes and Cain Velasquez despite a forgettable loss to “The Black Beast.”