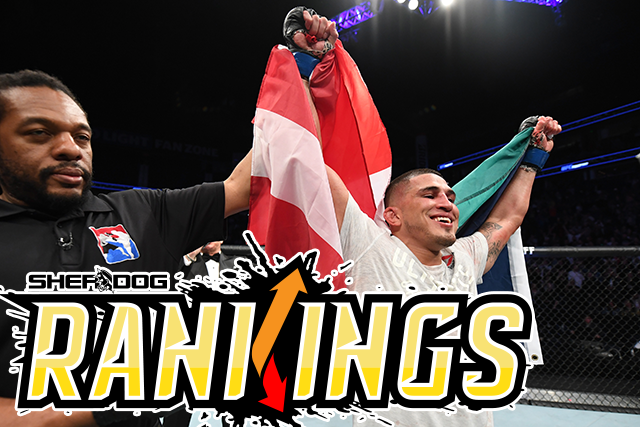 Ever so often, Anthony Pettis shows why he was the first mixed martial artist chosen to grace the iconic Wheaties box.

This past Saturday was one of those instances, as “Showtime” knocked Stephen Thompson out with a Superman punch 4:55 into the second round of their headlining encounter at Bridgestone Arena in Nashville, Tenn. It was Pettis’ first foray at 170 pounds, making the Roufusport anchor one of just three fighters to earn UFC triumphs in a trio of different weight classes. By becoming the first man to finish “Wonderboy,” Pettis enters our welterweight bubble while still maintaining his spot on the lightweight contenders list due to his ongoing interest in pursuing fights at 155 pounds.

For the other standouts at UFC Fight Night 148, success resulted in more of a holding pattern. Ranked fighters Curtis Blaydes (No. 7 heavyweight), Jussier da Silva (No. 6 flyweight) and Jennifer Maia (No. 5) were all victorious in the Music City, but none of the above was able to make up any ground in their respective division. That wasn’t the case for flyweight Jordan Espinoza, who makes his debut on the 125-pound bubble on the strength of a three-round verdict over Eric Shelton — his fifth consecutive triumph.

Finally, with his long-anticipated light heavyweight debut finally booked, former UFC and Strikeforce middleweight champion Luke Rockhold exits the 185-pound poll. Taking his place is Antonio Carlos Jr., who will go for his sixth consecutive victory at UFC Rochester on May 18.