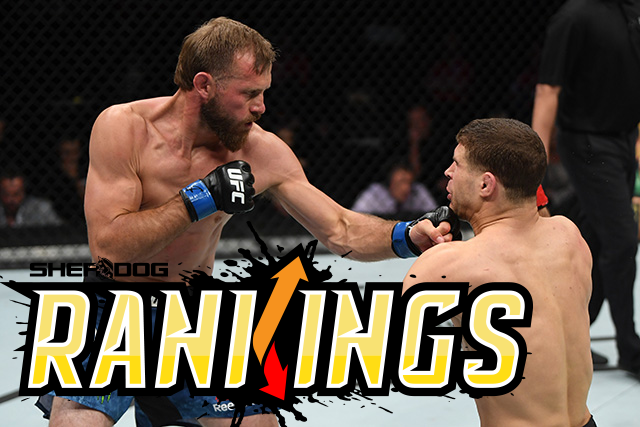 Not only is “Cowboy” a doting dad, but the popular veteran has fashioned a three-fight winning streak since the birth of his son. Two of those victories have occurred at lightweight, as the BMF Ranch founder looks primed for one last run at 155 pounds following a clear-cut decision victory over Al Iaquinta in the UFC Fight Night 151 headliner. A title shot would appear to be at least another win away, but in the meantime, Cerrone is still angling for a big payday against Conor McGregor.

Even if that doesn’t happen, our panel has voted to reward Cerrone in a different way, placing him at the No. 4 spot ahead of the “Notorious” Irishman. Including his 2019 wins over Iaquinta and Alexander Hernandez, Cerrone is 10-1 in lightweight fights dating back to 2013 — and that includes a victory over McGregor’s lone 155-pound victim, Eddie Alvarez. In this instance, McGregor’s inactivity hurts him. Perhaps the two stars can settle things in a head-to-head matchup this summer.

Elsewhere, Shane Burgos debuts in the featherweight poll at No. 10 after earning a signature win over Cub Swanson at UFC Ottawa. The Team Tiger Schulmann representative has won five of his six Octagon appearances and is an interesting new face at 145 pounds. Swanson, who hasn’t won a fight since April 2017, falls out of our rankings entirely. Finally, keep an eye on “The Ultimate Fighter 28” winner Macy Chiasson, who dominated Sarah Moras to climb to the top of the bubble list at women’s bantamweight.