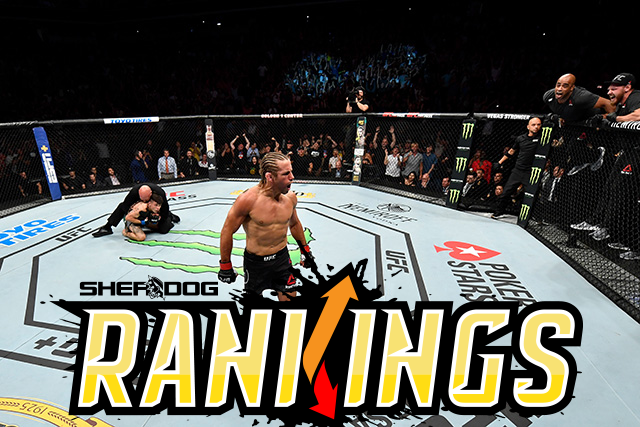 “The California Kid” made a triumphant return from retirement in the UFC Fight Night 155 co-main event, stopping prospect Ricky Simon in just 46 seconds to send the hometown crowd into a frenzy. It wasn’t a one-off performance for the Team Alpha Male founder, either, as he has vowed to make the most of the time he has left. The coming months could prove to be interesting for the 40-year-old former World Extreme Cagefighting champ. On the basis of his sparkling return effort as well as his body of work, Faber re-enters our bantamweight poll at No. 10.

Elsewhere, Germaine de Randamie needed even less time to put away surging prospect Aspen Ladd in the UFC Sacramento main event, as “The Iron Lady” notched her fifth consecutive triumph with a 16-second stoppage victory. The Dutch kickboxer remains stuck in second place in the bantamweight rankings behind reigning champion Amanda Nunes, though a rematch with “Lioness” could be looming in the near future.

Julia Budd was also unable to make any headway in the female featherweight poll despite a first-round TKO of Olga Rubin in the Bellator 224 headliner. The promotion’s reigning 145-pound queen has just about cleared out all the competition in her division and may seek challenges outside the Bellator realm (read: Garcia, Gabi) when she returns to action. Regardless, Budd is the clear-cut No. 3 featherweight in the world behind Nunes and Cristiane Justino.

In other movement, Invicta strawweight tourney champ Brianna Van Buren joins the 115-pound bubble after outpointing the previous No. 9, Livinha Souza, and Kaitlin Young enters the featherweight rankings in lieu of Amanda Bell, who was not competitive in a loss to Arlene Blencowe at Bellator 224.