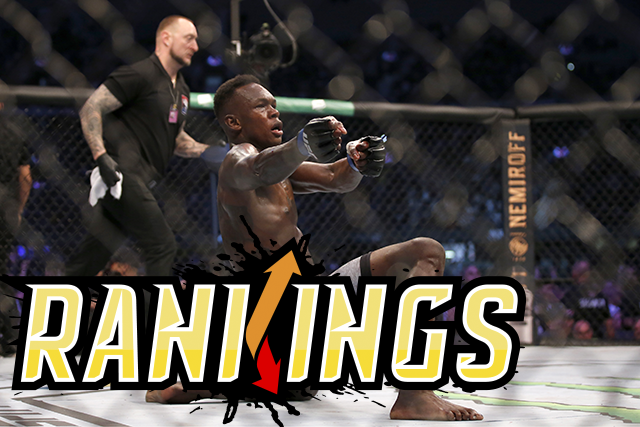 Israel Adesanya was the best he’s ever been against Robert Whittaker in the UFC 243 headliner.

“The Last Stylebender” was patient and elusive, countering his opponent effectively and picking his spots to land damaging shots. He floored Whittaker at the end of Round 1 and then finished the job in the second stanza, as he sent his foe stumbling backward with a pair of hooks before clinching his victory with some follow-up shots on the ground at the 3:33 mark of the period. By unifying the middleweight belts, Adesanya ascends to No. 1 in our middleweight rankings, and he already has his sights set on the No. 3, Paulo Henrique Costa. Whittaker, who had a nine-bout winning streak snapped, falls to second.

Elsewhere, Dan Hooker won for the sixth time in seven Octagon appearances, as he cruised to a dominant decision verdict against former title challenger Al Iaquinta. Not only has “The Hangman” rebounded from a brutal beating at the hands of Edson Barboza with a pair of impressive wins, but he enters our deep and talent lightweight poll at No. 10. Iaquinta, who has lost three of his last four, falls from No. 8 to the bubble. Finally, Megan Anderson garnered her first definitive Octagon triumph, submitting Zarah Fairn dos Santos with a triangle choke in the opening round of their featherweight clash. She stays put at No. 7 at 145 pounds.

A couple weekly housekeeping notes, and these are fairly significant: It has been a year since Conor McGregor tapped to Khabib Nurmagomedov at UFC 229, and the former lightweight champion still does not have a fight booked in the UFC. As a result, “The Notorious” Irishman has been removed from our 155-pound poll. Likewise, Eddie Alvarez doesn’t have a documented lightweight bout on his ledger since July 2018 (His two subsequent appearances in One Championship have taken place a weight class above), so he too has been pulled from the lightweight rankings. Moving up into the Top 10 to replace McGregor and Alvarez are recent UFC 242 foes Paul Felder (No. 8) and Edson Barboza (No. 9).