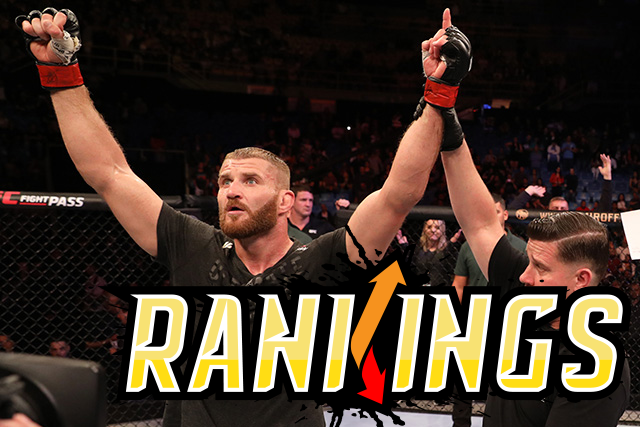 Jan Blachowicz has demonstrated a knack for giving former middleweight champions a rude welcome to 205 pounds.

After knocking out ex-UFC king Luke Rockhold in the summer, Blachowicz captured a split-decision triumph over former Strikeforce titlist Ronald Souza in the UFC Fight Night 164 headliner in Sao Paulo on Saturday. It wasn’t an enthralling victory, but at a minimum, the 36-year-old Pole doesn’t lose any momentum in a division in which he has established himself as an unlikely contender. Blachowicz, who has won six of his last seven, holds steady at No. 7 in our latest 205-pound poll.

Elsewhere, Sinead Kavanagh knocked Olga Rubin out of the women’s featherweight Top 10 with a TKO triumph at Bellator 234 in Israel. Both Kavanagh and Rubin find themselves on the 145-pound bubble in a division where the talent pool is quite slim. On that same card, Linton Vassell won his first heavyweight fight at the expense of Sergei Kharitonov, and as a result, Jarizinho Rozenstruik claims the final spot on the big-man bubble. Finally, Charles Oliveira extended his finishing streak to six at UFC Sao Paulo, and he maintains his standing on the lightweight bubble.