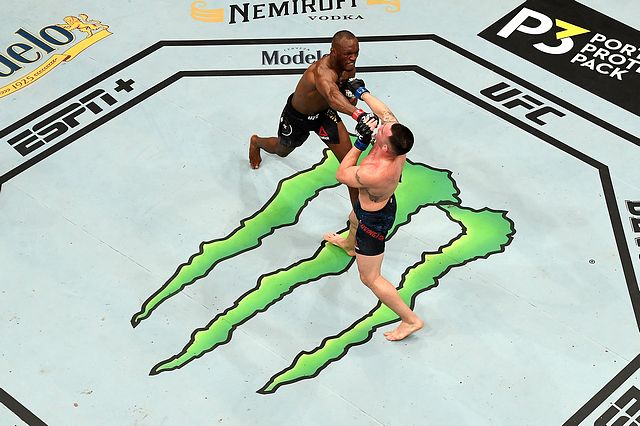 Kamaru Usman solidified his place atop the welterweight mountain at UFC 245.

After a dominant five-round verdict over Tyron Woodley brought “The Nigerian Nightmare” UFC gold earlier this year, Usman successfully defended his title for the first time with a memorable stoppage of Colby Covington at the T-Mobile Arena in Las Vegas on Saturday night. The two rivals went toe-to-toe for the better part of five rounds before Usman ended the proceedings via technical knockout at the 4:10 mark of Round 5. As a result, Usman remains the unquestioned No. 1 in our welterweight rankings, but Covington rises as well, moving past Tyron Woodley and into the second spot on the basis of his valiant effort in defeat.

Meanwhile, there’s a new featherweight No. 1 after Alexander Volkanovski vanquished Max Holloway in the UFC 245 co-main event. The Aussie extended his winning streak to 19 with a five-round verdict over Holloway, who hadn’t lost a featherweight bout since 2013. While the tides shifted at men’s featherweight, the status quo remained atop the women’s bantamweight division, where Amanda Nunes stymied No. 3 Germaine de Randamie for five rounds to retain her 135-pound strap.

That wasn’t the case further down the women’s bantamweight poll, as Irene Aldana jumps from the bubble to seventh on the strength of a knockout win over the previously unbeaten – and former No. 4 ranked – Ketlen Vieira. Men’s bantamweight saw movement as well, with Petr Yan jumping from No. 8 to No. 6 following a lopsided win over Urijah Faber. Longtime former 145-pound kingpin Jose Aldo also joins the bantamweight rankings at No. 9 following a competitive split-decision loss to second-ranked Marlon Moraes in a bout many thought Aldo won.