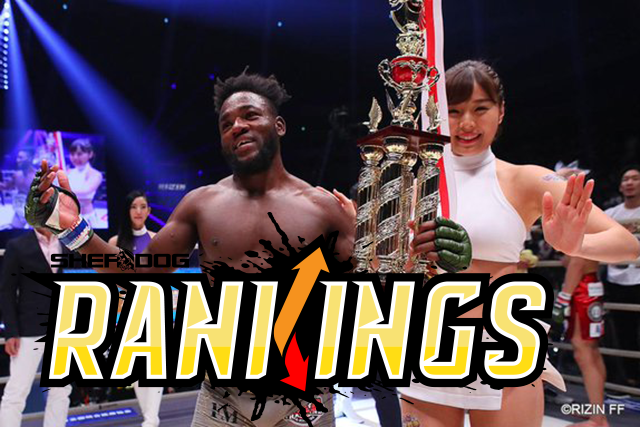 Manel Kape claimed the Japanese promotion’s vacant bantamweight crown with a second-round technical knockout of Kai Asakura in the evening’s headliner at Saitama Super Arena in Saitama, Japan on New Year’s Eve. Asakura, who vaulted into our bantamweight poll on the basis of a first-round stoppage of Kyoji Horiguchi in a non-title bout this past August, was expected to continue his emergence into stardom, but Kape obviously had other plans.

Kape’s upset victory caused some upheaval at 135 pounds. The result: Rizin’s trio of bantamweights all find themselves on the bubble, with previous No. 7 Asakura and No. 8 Horiguchi slotting in just behind the newly-crowned champ, who checks in at No. 11 in his rankings debut.

Meanwhile, Seo Hee Ham garnered a long-awaited victory over rival Ayaka Hamasaki, claiming the super atomweight crown with a split-decision victory in the Rizin 20 co-main event. Ham, who had lost twice to Hamasaki in the Jewels organization, takes over the No. 1 spot at atomweight, while Hamasaki falls to second. Perhaps a fourth bout could be in their future. Everyone else held steady in the rankings here, as No. 4 Miyuu Yamamoto, No. 5 Kanna Asakura and No. 6 Rena Kubota all were victorious against unranked foes over the extended weekend. Elsewhere, former Bellator champ Michael Chandler returned to the lightweight bubble at No. 15 thanks to Tofiq Musayev’s hard-fought decision triumph over previously No. 15 Patricky Freire in the finals of the Rizin 155-pound grand prix, while Jiri Prochazka remained at No. 14 at light heavyweight after walloping UFC veteran C.B. Dollaway in a successful title defense earlier on the card.