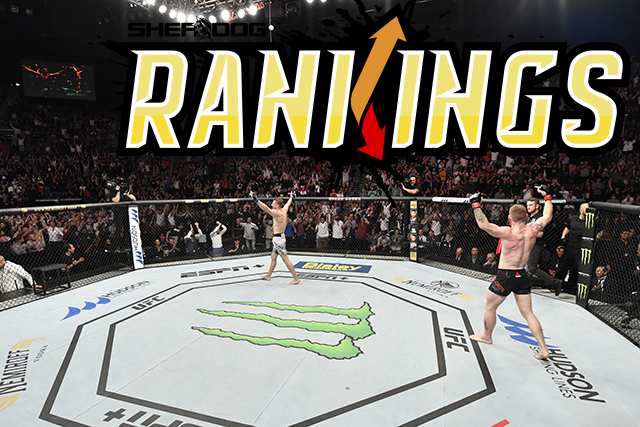 It was a clash that Dan Hooker and Paul Felder won’t soon forget.

The two lightweights battled tooth-and-nail for five rounds in the UFC Fight Night 168 headliner in Auckland, New Zealand, on Saturday night, and after 25 grueling minutes, Hooker emerged with a split-decision triumph. While unofficial scorecards tended to favor Felder, what matters is that “The Hangman” officially earned his third consecutive victory in front of a delighted hometown crowd.

Thanks to his efforts, Hooker climbs one spot in our latest lightweight poll from ninth to eighth. He can go no higher, however, as the beatdown at the hands of Edson Barboza in December 2018 still resonates. In defeat, Felder falls from seventh to ninth.

Elsewhere, Xiaonan Yan dismantled former title contender Karolina Kowalkiewicz in a featured strawweight encounter in Auckland, giving the Chinese fighter five consecutive wins in the Octagon. For her efforts, Yan moves up two slots from No. 15 to No. 13 at 115 pounds.

Finally, there is some housekeeping in order at atomweight. Three ranked athletes — No. 8 Minna Grusander, No. 11 Kyra Batara and No. 14 Lisbeth Lopez-Silva — have reached their expiration dates due to a year or more of inactivity. They have been replaced at the bottom of the atomweight poll by Alyona Rassokhyna, Kelly D’Angelo and Alyse Anderson. Meanwhile, everyone else moves up, with Tomo Maesawa grabbing the final spot in the Top 10.