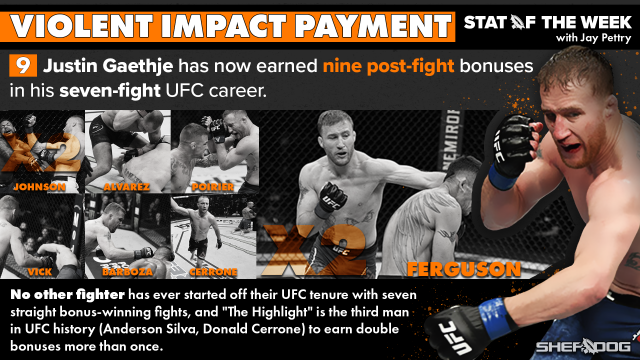 Justin Gaethje is making significant progress in what is arguably the most competitive division in mixed martial arts.

“The Highlight” captured the interim lightweight crown with a beatdown of Tony Ferguson in the UFC 249 headliner at VyStar Veterans Memorial Arena in Jacksonville, Florida, on Saturday night, setting up a title unification bout with reigning 155-pound champion Khabib Nurmagomedov sometime in the future. In terms of rankings, Gaethje moves from fourth to third at 155 pounds but remains behind Dustin Poirier, who was the last man to defeat the former World Series of Fighting king. Ferguson, who displayed commendable toughness in defeat, falls two spots to No. 4 after seeing a remarkable 12-bout winning streak come to an end.

While UFC 249 was one of the deepest cards in recent memory, the rest of event yielded limited movement in Sherdog.com's divisional rankings. Henry Cejudo remained atop the bantamweight division with a stoppage of Dominick Cruz in the co-main event while denying entry to oft-injured Alliance MMA product in the process. As for Cejudo’s retirement announcement? We’re taking it with a grain of salt.

Elsewhere, heavyweight contender Francis Ngannou was absolutely terrifying in dispatching Jairzinho Rozenstruik in just 20 seconds, but he remains stuck at No. 3 in the weight class as Stipe Miocic and Daniel Cormier continue to circle one another for a potential trilogy bout later this year. At strawweight, Carla Esparza edged Michelle Waterson via split decision to hold steady at No. 8. Waterson, meanwhile, falls to one spot from 10 to 11, making room for the unbeaten Marina Rodriguez to join the Top 10. Other notable winners such as Anthony Pettis (No. 14 at welterweight) and Calvin Kattar (No. 11 at featherweight) did not generate any movement in their respective divisions. Finally, Alexey Oleynik’s triumph over Fabricio Werdum allows him to replace Justin Willis at No. 15 in the heavyweight rankings.

One quick housekeeping note: Due to the ongoing uncertainty of the coronavirus pandemic and the litany of postponements and cancellations that have accompanied it, we have relaxed our rankings eligibility requirements. In the past, a fighter would be ineligible for the divisional rankings following a year of inactivity. We’ve extended that deadline to 18 months for the time being and reserve the right to go beyond that when deemed necessary. These are strange times, and leniency may very well prove to be the best policy in many cases.