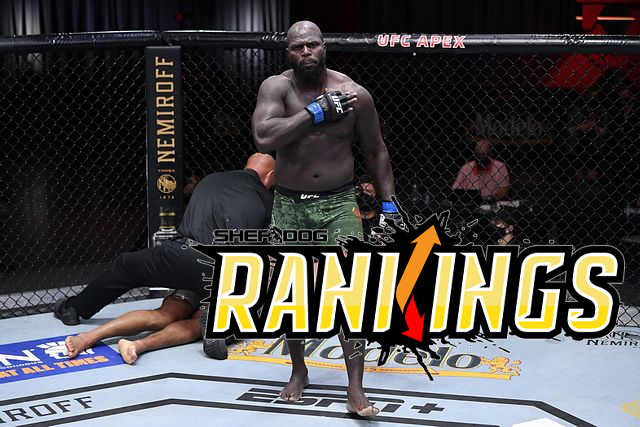 
While Stipe Miocic got most of the acclaim — and deservedly so — for his work on Saturday night, Jairzinho Rozenstruik was also making big moves at UFC 252.

“Bigi Boy” rebounded from a 20-second knockout loss to Francis Ngannou this past May in emphatic fashion, as he earned an impressive Round 2 stoppage of former heavyweight king Junior dos Santos in a featured bout at the UFC Apex in Las Vegas. With 10 KO/TKO finishes among his 11 professional triumphs, the Suriname-based boxer is a formidable foe for virtually anyone in the heavyweight division, and his latest triumph allows him to ascend from No. 8 to No. 5 in Sherdog.com's latest heavyweight rankings.

While Rozenstruik profited in a big way, dos Santos’ third consecutive knockout loss sends “Cigano” to eighth in the big man’s poll, and he may be relegated to the role of gatekeeper for the foreseeable future. As for the top of the division, there’s not much to see: Miocic and Daniel Cormier remain 1-2 following the completion of their trilogy, with Francis Ngannou breathing down their necks in the third spot.