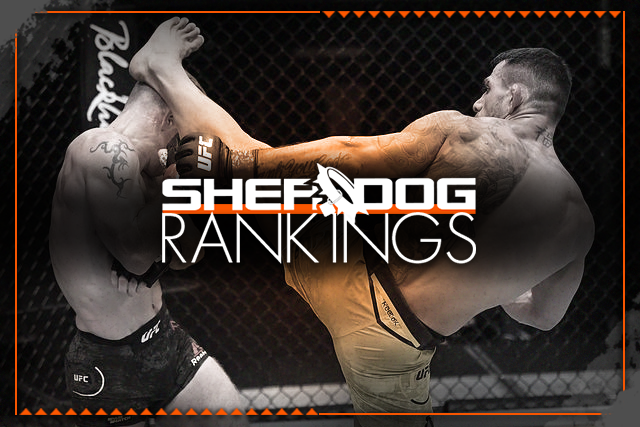 
Fresh off a stint at 170 pounds that started well and ended ugly, Rafael dos Anjos looks ready to be a factor in the Ultimate Fighting Championship’s lightweight division once again.

The 36-year-old Brazilian looked right at home in his first 155-pound bout in more than four years, as he captured a split decision victory against Paul Felder in the UFC Fight Night 182 main event this past Saturday at the UFC Apex in Las Vegas. The former champion immediately slots in at No. 7 in Sherdog.com's latest lightweight poll, two spots ahead of Felder, who offered a game performance despite accepting the fight on just five days’ notice.

Elsewhere, Bellator MMA marched on in Bellator’s featherweight grand prix with a first-round knockout of Pedro Carvalho in a quarterfinal matchup at Bellator 252 last Thursday at Mohegan Sun Arena in Uncasville, Connecticut. For now, Freire stands maintains his eighth ranking at 145 pounds, but there’s room for advancement should the Bellator champ continue to make his way through the bracket as expected.