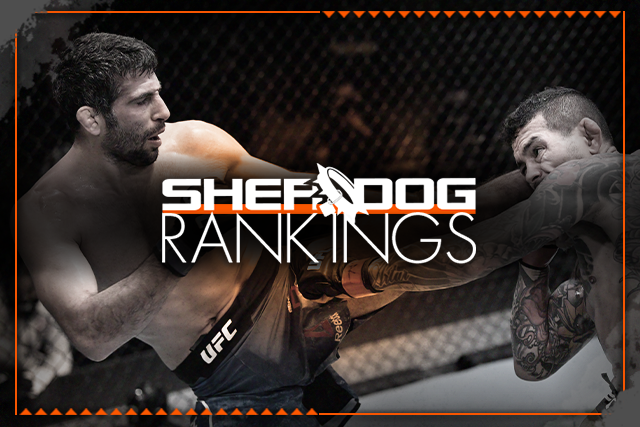 
Beneil Dariush is a man on the move in the UFC’s lightweight division.

The Kings MMA product won his sixth consecutive bout at UFC Fight Night 184, earning a hard-fought split-decision triumph over fellow 155-pound contender Diego Ferreira at the UFC Apex in Las Vegas on Saturday night. In improving to 2-0 against an opponent who hadn’t tasted defeat in nearly six years, Dariush rises to No. 10 in Sherdog.com’s latest lightweight poll. Maybe now he can also get the respect from UFC matchmakers that he so desires.

Meanwhile, Alexander Volkov, Cory Sandhagen and Alexandre Pantoja all earned significant victories at UFC Fight Night 184, but none was enough to boost their previous ranking at heavyweight, bantamweight or flyweight. All three athletes have significant momentum, however, so their status is worth watching in the coming months.

Finally, we bid farewell to Pam Sorenson (women’s featherweight) and Alyse Anderson (atomweight), both of whom reached their 18-month inactivity threshold this weekend. At featherweight, Chelsea Chandler joins the bubble at No. 15, while Si Woo Park enters the atomweight ranks at 15th.