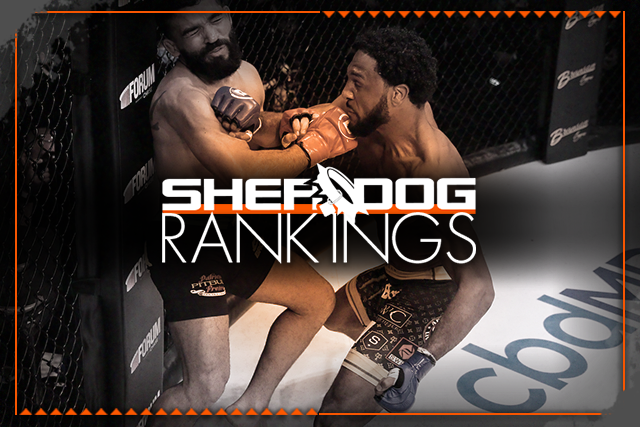 
A.J. McKee believes he’s the best featherweight in the world, regardless of promotion. Now he has the ranking to back that up.

After submitting Patricio Freire inside of a round to win the 145-pound grand prix and claim the featherweight title at Bellator 263, the undefeated “Mercenary” rockets up the latest Sherdog.com divisional rankings to No. 2, behind only reigning UFC champ Alexander Volkanovski.

Elsewhere, Sean Strickland joins the middleweight poll at No. 13 after a convincing five-round verdict against Uriah Hall in the UFC on ESPN 28 main event. Strickland has won five straight fights within the Las Vegas-based promotion and is in line for another high-profile matchup in his next Octagon appearance.

Additionally, there are several housekeeping notes this week: Most significantly, top-ranked light heavyweight Jon Jones, who hasn’t competed since his title defense against Dominick Reyes in February 2020, exits the light heavyweight rankings after 18 months on the sideline. If and when “Bones” returns, it will likely be at a new weight class.

Also exiting the divisional rankings are Yair Rodriguez, who hasn’t fought in 22 months; Jeremy Stephens, who leaves the featherweight poll following an unsuccessful return to 155 pounds and a six-bout winless streak; and Alexa Grasso, who bids the strawweight poll farewell following consecutive victories at 125 pounds.