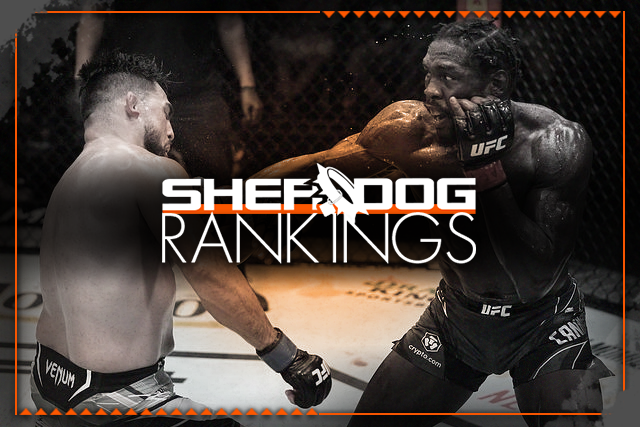 
After suffering his first loss since moving to 185 pounds last October, Jared Cannonier bounced back in a big way on Saturday night.

“The Killa Gorilla” emerged victorious from a competitive five-round battle with Kelvin Gastelum in the UFC on ESPN 29 headliner at the UFC Apex in Las Vegas, giving him four triumphs in five middleweight appearances. Though a loss to Robert Whittaker at UFC 254 knocked him out of a potential title shot, Cannonier remains a relevant figure in the division and maintains his No. 6 ranking in Sherdog’s latest poll. The same can’t be said for Gastelum, who has lost five of his last six and drops from 12th to 15th at 185 pounds.

Elsewhere, Alexandre Pantoja scored a pivotal submission victory over ninth-ranked Brandon Royval at UFC on ESPN 29. Not only does the Brazilian climb over the slumping Joseph Benavidez to No. 4 at 125 pounds, but he looks like an intriguing title contender thanks to a pair of previous victories over current champ Brandon Moreno.

There is also some significant housekeeping to handle this week. After some deliberation, the Sherdog.com staff has elected to keep the 18-month inactivity threshold that was instituted during the beginning of the COVID-19 pandemic. Simply put, injuries, contract negotiations and other issues can keep otherwise active fighters on the shelf longer than a year, and we’re going to give those things time to play out before dropping someone from the rankings. There is one exception, however: Athletes who announce their retirement will be given one year to compete before they are removed.

That leads us to this week’s business, which includes the removal of top-ranked bantamweight Henry Cejudo and fourth-ranked heavyweight Daniel Cormier. Neither has come close to coming out of retirement, and both have hit — or surpassed their 12-month limit. As a result, we’d like to welcome Dominick Cruz to the bantamweight rankings and Cheick Kongo to the heavyweight poll.